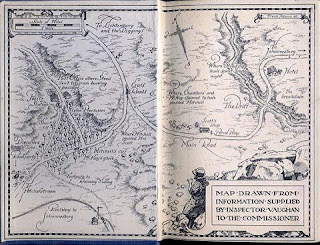 Even the keenest crime fans could be forgiven for not being familiar with The Pressure Gauge Murder, or with its author, who rejoiced in the name of F.W.B. Von Linsingen. Plenty of writers with a name like that might have considered a pseudonym that rolled off the tongue a bit more easily. But not F.W.B. However, it has to be admitted that he never published another crime novel.

I had never heard of the book myself, until I came across mention of it in Steve Lewis’s terrific blog. He highlighted its great claim to fame – a marvellous map - and I’ve borrowed the image.

I picked up my copy at the Harrogate book fair last Saturday. It’s a novel set in South Africa – the opening scene is set in The Black Diamond Hotel, ‘a drinking salon of repute among the Lichtenburg diggers’. I’m not yet sure what I’ll make of the mystery, but a book with a map like that can’t be too bad!

Very Tolkien-esque! And I think that a book with that title would probably appeal very much to scientists! Must give it a try, I am intrigued.

Incidentally, I have just (today) made a suggestion of a film for you to review over in the comments at Euro Crime blog.

There seems to have been a series of novels (around 1930?) from that time and that publisher that had those fantastic endpaper maps.

The idea of maps in the Golden Age often gets ridiculed, but I think the real Golden Age fan loves them.

By the way, I believe the author was a South African schoolmaster who was later killed in World War 2.

Maxine, I have responded on Eurocrime.
Curt - I am very keen on maps! Thanks for the info about this obscure author. Do you know any more about him?

No, Martin I don't. And I have the book but have not read it. Please let us know what you think.

Thanks, Curt, I'll look forward to hearing about them!