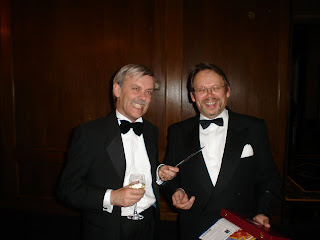 Brother Grimm was the second thriller published by Craig Russell. It appeared in 2006, and a couple of years later, he won the CWA Dagger in the Library. On that same evening I was introduced to him, having been awarded the Short Story Dagger, and that’s when we had our photo taken together. But I’ve only just got round to reading one of his books.

And it is, I must say, a gripping story. Set in Hamburg, it features a likeable cop called Jan Fabel and a psychotic murderer with a fixation on the folklore collected by the Brothers Grimm. I’ve been working on an idea with a folklore angle myself, and I did wonder whether there was any worrying similarity between his concept and mine – fortunately, the answer is no. I liked the way in which Russell ‘followed through’, in the sense of embedding the Grimm’s fairy tale concept in almost every aspect of his novel. This isn't an easy trick to pull off, but he managed it very well.

A girl’s body is found, and there is some puzzling confusion about her identity – is she, or is she not, a teenager who disappeared three years ago? The answer soon proves to be no, which begs a question – why did the killer leave a message sending the police off on that particular track? A couple having an affair are the next victims, and it soon becomes clear that a serial killer is at work.

There are copious red herrings, but this was one book where I managed to spot the culprit on his first appearance (the overly casual way he was brought into the story was the giveaway) - but this didn’t detract from my enjoyment. There were a few points in the middle when there was possibly a bit too much ‘tell’ and not enough ‘show’ in the writing, but by the end of the book I realised this was nothing more than a minor quibble. Fabel and his team are an interesting bunch, and Brother Grimm is a highly entertaining piece of work. I very much look forward to reading more of Craig Russell's fiction in the future.

I'll have to check "Brother Grimm" out...sounds like a great story. I wonder if I'll be able to spot the killer as quickly as you do!

"I’ve been working on an idea with a folklore angle myself, and I did wonder whether there was any worrying similarity between his concept and mine" - I would probably also have worried if I were in your shoes, but on the other hand there are only so many plots and angles. So really, what makes novels different is the author´s individual voice. And it seems to me that book lovers enjoy discussing and comparing books which share plots, environments, periods etc. This is what Margot does every day on her wonderful blog, and far from deciding I won´t read another book on the theme, I am often tempted to read more if the first one was exciting.

great post and pic Martin. I was fortunate enough to interview Russell (by phone) late last year for a feature article in a NZ newspaper. We ended up chatting for over an hour - he's a fascinating guy.

BROTHER GRIMM was also the first Russell book I read - I picked it up in the airport on the way to the US in 2007, and read it while at summer camp. Good stuff. I enjoyed the way he layered folklore/myth, recent history, and present day.

I really enjoyed LENNOX, the first in his 1950s Glasgow-set series, which came out last year, as well.

Thanks, Elizabeth.
Dorte, I feel very much the same!

Craig, good to hear from you. I will look out for Lennox. I have just had a look at your excellent blog and will add it to my blogroll.