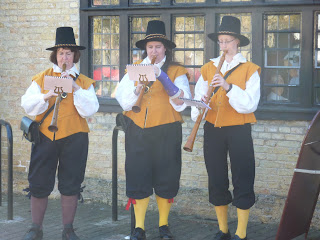 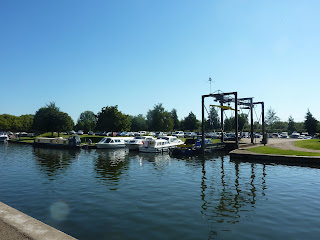 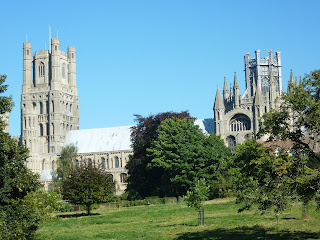 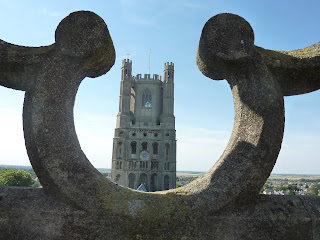 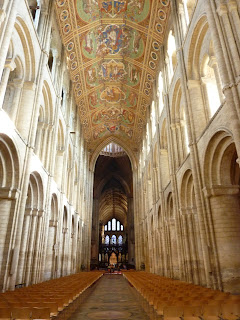 East Anglia is the setting for some marvellous crime fiction, but it's a part of England that I've seldom visited. This is quite a confession, given that in the 90s I co-edited, with Robert Church, Anglian Blood, a CWA anthology of East Anglian crime fiction; the local chapter invited me to become involved, not because of my knowledge of the area but because of my interest in short stories. That book boasted a cover that I really did not like, but thankfully, the contents were better than the artwork, and the book contained a couple of stories that were short-listed for CWA Daggers. Suffice to say that I felt that a return trip to Fenland was long overdue.

So, on a September Sunday as lovely as any we've had all year, my webmaster and I headed from Cambridge to Ely - a place I've never been to before, but of which I've heard good things.In a nutshell, the praise Ely receives from its fans is well-deserved. We had a terrific day, which included a walking tour and a trip to the top of the remarkable octagonal tower of the utterly stunning cathedral.

I suppose the most famous East Anglian detective novel is Sayers' The Nine Tailors, which most people would acknowledge is a classic of the genre (though after re-reading most of her work earlier this year, I decided I preferred the very appealing Murder Must Advertise.) She captures the atmosphere of the Fens very effectively. P.D. James also loves the area, and Devices and Desires in particular benefits from an evocative setting.

The late Alan Hunter - who created Inspector George Gently and who, like P.D. James, contributed to Anglian Blood - was another East Anglian crime writer of note. It's sad that his books were not televised until after his death. Among present day practioners, Jim Kelly is especially good at Fenland settings, and I'm a fan of his enjoyable puzzle Death Wore White. My trip to Ely and Fenland, although very brief, helped me to understand why the landscape has made such a strong impression on writers over so many years. It's a fascinating place, and I shall aim not to leave it too long before exploring it more extensively.

Martin - What wonderful 'photos! These are just great! I'm glad you enjoyed your trip as much as you did.

I have been to England but I haven't been to the Fens. Oddly enough, I was just talking with a friend about a book we both loved that is set there--Graham Swift's Waterland. Although it isn't really crime fiction straight out, there is a crime and it would work for anyone who likes the more literary end of crime fiction, I think.

Waterland is a fantastic book - atmospheric and beautifully written. And you're right, there's an intriguing crime too.

Interesting, thanks. I read Shuttlecock by Swift a long time ago, but I've never got round to Waterland. Your comments, and my visit, make me want to give it a try.

I read Shuttlecock after Waterland. It was good, but it doesn't have the scope of Waterland--not that it was intended to.

I pulled a Jim Kelly mystery at random from the library shelves and liked it so much, I went back and read everything else the library had. I remember one had a character with the last name Thoaday and I assumed it was an homage to The Nine Tailors, even if that is a common name in that area.