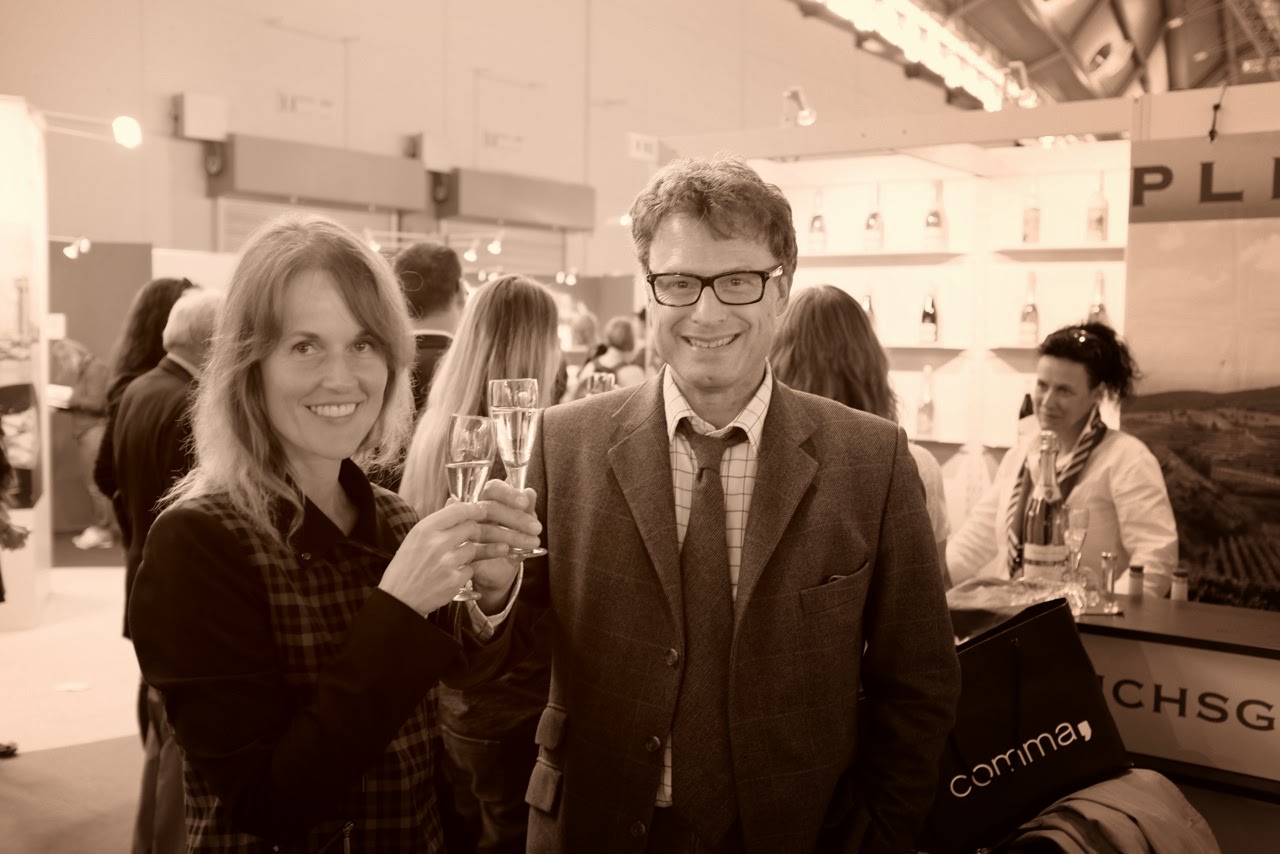 I'm fascinated by the global reach of crime fiction, and in recent years I've found it a real joy to get to know a host of fellow writers and enthusiasts from different parts of the world. It's a little over a year since I took part in the AEIP international crime writers' conference held in Oxford, and I've just received a very pleasing reminder of that terrific event. It takes the form of my copy of a nicely produced German language anthology, Mit Schirm, Charme and Pistole, to which I was invited to contribute after the conference, along with three British writers whom I much admire. My story, "Consuming Passion", was set in Oxford itself, and translated by the editors, Hughes Schlueter and Eva Lirot. They are pictured above, and I invited them to contribute a guest blog about the book. Here it is:

"With Umbrella, Charme and Coke
Sounds odd? Well, it really does. Those of you familiar with classic British shows on telly and their foreign titles might recognize mid sixties “The Avengers” starring Diana Rigg and Patrick Macnee. “Mit Schirm, Charme und Melone”, so the German title, where “Melone” (yep, the fruit) refers to Steed’s bowler hat.

By the slight variant and allusion “Mit Schirm, Chame und Pistole” runs a new anthology of 26 crime short stories, we, Eva Lirot & Hughes Schlueter, had the definite and indefinite pleasure to edit. To capture and to render original soundtrack and flavour, we asked beneath our German colleagues four born and bred brits to contribute: Janet Laurence, Susan Moody, Peter Lovesey and the operator of your favourite blog, Martin Edwards.

In order not to miss anything our fellow countrymen might expect from Albion shores and cockney corners we set up a matrix of topics/settings and writers in which we co-ordinated feathers and ink in order not to have a plethora of witty little old ladies poisoning handsome but not-so-witty marriage impostors and a shortcoming of Cotswolds beauty. Finally we came out with gorgeous and very unhealthy arrangements that we hope will entertain the audience at its best: among others we feature stylish and weird dinners in Oxford, Scottish ghosts, the prime minister’s dog, a guideline to distinguished contract assassination, a fashion shoot, a witty little old lady NOT poisoning her environment, a Victorian Christmas affair, a butler from Ivor Spencer, a Loch Ness mystery and a killer exercising murder with wax figures at London’s Madame Tussauds.

Introduced at Frankfurt bookfair just some hours ago, we have received a very warm welcome and can’t wait to present book and texts in readings. You see, we Germans love British attitude and appreciate your “stiff upper lip” even in case of utmost danger. Like the society lady we met over tea, telling us that she and her husband actually “help police with enquiries” and we instantly took for granted that their cottage has been washed inside out and poor hubby remands in custody.

Like in Last night of the proms, we save the best for last: Patrick Macnee himself has sent his personal greetings to all readers and such a nice photograph of himself to print in the book! We couldn’t get a better foreword."

It's an enterprising project, and there is even a video trailer for the book on Youtube, although so far my attempts to link to it via this post have failed. Worth seeking out, though. When, as a boy, I watched The Avengers avidly during the Sixties, I never imagined that one day I'd contribute to a book inspired by the show. But I'm really glad it's happened - thanks to Hughes, Eva and Ralf of the publishers KBV.

They have done you much-deserved honour, Martin. Congratulations. It is my own "definite and indefinite pleasure" to say that as I read their guest blog, I found Eva and Hughes the most delightful and charming people. A lovely read. Thank you.