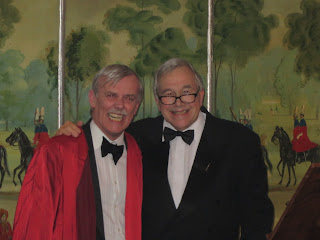 Last Thursday evening was for me very special. The highpoint of my crime writing life, no less. For Thursday was when, during a wonderful occasion as the Dorchester Hotel, I became President of the Detection Club. Since 1930, there have only been seven previous Presidents, plus a co-president, Lord Gorell, who acted as a public speaker during the early years of Agatha Christie's nineteen year reign as President. My immediate predecessor was Simon Brett, who has served with distinction for the past fourteen years.

The first President, from 1930, was G.K. Chesterton - Sir Arthur Conan  Doyle was approached, but too infirm in the months before his death to accept. Chesterton was followed by E.C. Bentley, author of the book that really inaugurated the Golden Age of detective fiction, Trent's Last Case. Next came Dorothy L. Sayers, and when she died, Agatha Christie took over. After her death, Julian Symons became President; he was followed by another leading crime novelist and critic H.R.F.Keating, and then Harry handed over to Simon. As I said at the close of the installation ceremony, those are big shoes to fill. And there's a big presidential robe to fill, too! It was clearly designed, as Simon noted, to accommodate the well-upholstered Chesterton

A very happy feature of the evening was that we had the largest turn-out for a Detection Club event for many years. Those attending included Harry's widow Sheila, Jessica Mann (who was the Club Secretary for several years), the eminent journalist Katherine Whitehorn, and a host of distinguished novelists including Andrew Taylor and N.J. Cooper. The guest speaker was Mark Lawson, himself a novelist of note, as well as a leading cultural critic and commentator. He spoke movingly and well about a trio of recently departed crime writers, P.D. James, Ruth Rendell, and Henning Mankell, and we also had a chat about The Golden Age of Murder, which he reviewed very generously some months ago.

The Detection Club is a private, London-based dining club, no more, no less. But it has the distinction of being the first major social network for crime writers, and it played a significant part in the genre's development and its cultural heritage. And next year will see the publication of the first Detection Club novel for decades. This is The Sinking Admiral, a book which we thoroughly enjoyed putting together. I'm very glad to be part of the Club, and naturally I'm thrilled that the members have honoured me by asking me to take over from Simon. It's not something I ever anticipated, but I'm very, very glad that it's happened.

Selection by your peers has to be the greatest honour, Martin - and all your many fans will consider the honour very well deserved :) Congratulations again.

I can't think of anyone more eminently qualified to step into so many pairs of predecessor shoes! Congratulations, Martin. Long may you reign.

Martin, to assume the mantle of leadership over this illustrious group, one whose history has been of such literary significance for millions of readers for over eighty five years, must be a proud moment indeed. And I bet you're going to have so much fun! :) congratulations!

Congratulations! I am thrilled for you, Martin!

Congratulations, Martin! A well-deserved honour for you. :-)

Let me add my congratulations to all the others here: a well-deserved honor and a position I'm sure you'll fill with consideration and aplomb.

Congratulations, Martin! The robe becomes you.

Congratulations, Martin – an honour richly deserved through your wonderful contribution to the genre in so many ways. Enjoy it!

Congratulations, Martin. What a superb endorsement of your obvious love for the genre not to mention all the hard work you put in but still infused with a real sense of fun and enthusiasm.

Congratulations!
That is really an honour...I hope you have lots of fun.

A wonderful and well-deserved honour Martin - many congratulations.

Congratulations, Martin. Well deserved, as so many have said.

Well deserved, and you fit right in with that company! Really, I am just delighted. I look forward to The Sinking Admiral.

Congratulations Martin , no doubt you'll enjoy it to the hilt.