Forgotten Book - Twice Round the Clock 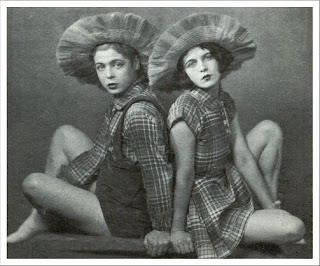 Today I'm featuring another Forgotten Book that came to me from Bob Adey's amazing collection. It's an inscribed copy of Twice Round the Clock, which was published in 1935 by Billie Houston. A striking feature of the front cover of the dust jacket is that it bears not one but two photographs of the author. I must admit I'd never heard of her, but I discovered that Billie was a celebrity in her day, a member of a highly popular music hall act called the Houston Sisters. A bit of research on the internet revealed a performance of theirs on Youtube and this interesting article, which includes the above photo.

This wasn't a ghost-written novel, but one that Billie apparently scribbled away in dressing rooms up and down the country while touring with her sister Renee. She had a long-standing love of the crime story, it seems. And whilst the prose isn't Dickensian, it's not only competent, but rather more engaging than some of the dry stuff that was published at around the same time. This is a readable story, a pleasing debut.

It gains something from a storyline that emphasises the rapid passage of time (hinted at by the title.) In a prologue, a body is discovered in a country house, but we then have a long flashback scene in which the tension mounts as it becomes evident that numerous people have good cause to commit a murder. The structure is slightly similar to that of a later book that I much admire, Henry Wade's Lonely Magdalen. The villain of the piece is one of crime fiction's most repellent victims, it has to be said.

This is a lively and unpretentious thriller which I enjoyed reading. It isn't a masterpiece,but it's a good enough first effort to have justified a follow-up. Unfortunately, three years after publication, Houston's husband committed suicide. She gave up life as part of the Houston Sisters - though Renee became quite a well-known actress - and remarried, settling, it would seem, for quiet domesticity. Her obituary in The Times makes no mention of her crime novel, but it's a shame that it's been so completely forgotten.

This would appear to have been a truly "forgotten book," save for you. Enjoyed the review, Martin.

Definitely a rare one, Mathew! Thanks