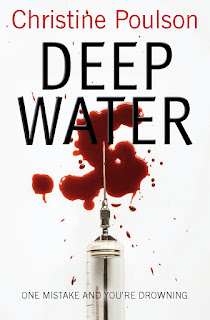 Long-time readers of this blog know that I'm fascinated by the rollercoaster nature of the writing life. Few if any authors enjoy unrelieved success - and even those who produce one bestseller after another are often prey to self-doubt. For almost every writer, there are ups and downs, and sometimes the downs are depressing - they can even become career-ending. My firmly held belief is that one has to face up to this reality, rather than ignoring it, because if one accepts that rough patches are inevitable with one's writing (as with one's life generally), one has a better chance of surviving them. With that in mind, I asked my friend Christine Poulson to talk about her own experiences, knowing that she is a writer of real distinction who has not had as many lucky breaks as she deserves. But I am optimistic that they will come her way. Meanwhile, here is what she has to say:

"When Martin suggested that I write about the ups and downs of crime-writing, I hesitated. The ups, yes - the thrill of publication, the pleasure of nailing a complicated plot, the satisfaction when a day’s writing goes well, the friends I’ve made among other crime writers, meeting people who have actually read your novel. I wasn’t so sure about sharing the downs. To lose one agent may be regarded as a misfortune; to lose two looks like carelessness.

But perhaps my story could be regarded as one of those morality tales the Victorians were so fond of in which hard work and perseverance win the day - or else as an awful warning. Because it all started so well. I found an agent with relative ease. Bob was a lovely man, a legendary agent of the old school, already over eighty when he took me on. He sold the first two novels in my Cassandra James series to Robert Hale in the UK and to St Martin’s Press in the US. But then the crime fiction editor left to go to law school (the irony of it!). She’d loved my novels and the new editor wasn’t interested. They decided not to take the third one. In the UK I was still with Hale, but with small prints runs and no paperbacks, things weren’t looking rosy.

Perhaps it was time to write a bigger, more ambitious novel. To that end, I acquired a young, ambitious agent. Too ambitious as it turned out. Before I’d even finished the novel, she’d quit to join a TV talent agency.

It can be harder to get an agent in mid career than when you are setting out. Suffice it to say that years went by and the pages listing agents in my copy of The Writers and Artists Yearbook had come unglued by the time I gave up and decided to try to place the novel myself. In the end a small independent press took Invisible, my standalone suspense novel, but only as a print on demand paperback and an ebook. For my next novel self-publishing seemed preferable and though there is no shame in that, it wasn’t what I wanted."

And then it happened: in September last year at the funeral of a old friend (who had nothing whatsoever to do with publishing) I got talking to a woman who asked me what I did. When I told her, she said, ‘You must talk to my husband. He’s an editor . . .’ By Christmas I had a two book deal with Lion Hudson. Deep Water came out on 21 October (27 January in the US), I’m hard at work on the second, and I couldn’t be happier with my new publishers.

My story isn’t at all unusual (though I would advise new writers not to bank on meeting an editor at a funeral). Luck in one form or another does play a part in publishing – your manuscript has to land on the right desk. But so does sticking at it and I don’t know if I would have done that without the support of other writers who shared their own stories of disappointment and rejection and told me not to give up (yes, I’m looking at you, Martin!). It helped to know that I wasn’t the first writer who’s had to reinvent themselves. I certainly won’t be the last.

What an interesting and encouraging (in the end) story Chrissie - I knew the outlines of your story but not the details. Thanks for sharing, and thanks Martin for hosting.

I feel your writing is tremendous, and aligns with my own interests and academic pursuits. Thank you for hours of wonderful entertainment. Your books are a delightful edition to my mystery collection.

I have only just read this, Meg, and am very flattered.

Thanks for sharing your ups and downs with us, Christine, and thanks to Martin for inviting you to share your story. Very eye-opening information for me. It is great that you hung in there and kept writing and trying.

I have followed your crime writing through some of that up-and-down career, but I didn't know the last "agent" chapter in your story. A little bit of strange magic there.
My own father was a mystery writer in the 1940s and also a blacklisted Hollwood screenwriter in the 'fifties, and he always called the plodding, grit-toothed job of continuing writing in bad times as "seat-of-the-pants" writing -- the words get on paper through wearing out your trousers by just sitting there and working. Well done for having the stamina to keep going.