Forgotten Book - The Fashion in Shrouds 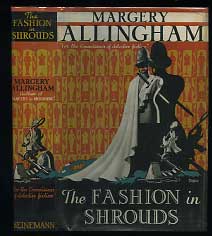 The description "forgotten book" is, to be honest, a misnomer when it comes to Margery Allingham's 1938 novel The Fashion in Shrouds. The famous Observer critic Torquemada extolled the book, saying, "To Albert Campion has fallen the honour of being the first detective to figure in a story which is also by any standard a distinguished novel". I'm not sure whether Dorothy L.Sayers would have agreed; perhaps she'd have thought that she'd beaten her friend Allingham to that particular achievement. But it's undeniably a stylish novel.

Time and again there are pleasing and inventive turns of phrase, of a kind that one doesn't usually find in the typical Golden Age mystery. What's more, the presentation of the fashion world, which provides, in the early stages of the story, an interesting setting, is convincing. Allingham's presentation of character generally avoids the usual cliches, and the relationship Campion has with the lovely young Amanda Fitton is quite subtly done.

It's not easy to read this book in the precisely way that readers in 1938 would have read it. There's a good deal about social class, and the role of women in society, that relates to the time, and although Allingham handles these issues in a thoughtful way, so much has changed. Overall, I did not find these aspects of the book to be as compelling as some of her admirers suggest. For me, as with Sayers' Gaudy Night, Fashion in Shrouds does sacrifice something in the attempt at literary sophistication. The plot simply isn't as exciting as, say, the plot of Christie's The ABC Murders or Wade's Lonely Magdalen.- and the latter also offers a fascinating picture of society, and the role of police in enforcing the law.

What of the story? The amoral Georgia Wells poses a threat to the relationship between Campion's sister Valentine and Alan Dell (for whose company Amanda works).Georgia's husband is murdered, and the fate of his predecessor also comes under the microscope. But the plot is secondary, I think, and for that reason I don't feel tempted to rave about this book in the way its most ardent fans do. Even so, I enjoyed reading it, and as Torquemada said, the writing is distinguished.

Not a forgotten book, but maybe a forgotten accent - Allingham decribes a minor character as having a 'Croydon accent'. It's clearly meant pejoratively. Being Croydon born and raised, I can't tell the difference between a Croydon speaker and a speaker from anywhere else in South London. Clearly, if I around in the 1930s and a member of the Campion set, I would do!

I've only read 4 other Margery Allingham books, of those I found Traitor's Purse to be the most satisfying.

I love this book, one of my favourite Allinghams. But no, it is not the plot or the solution that makes it memorable and entertaining.