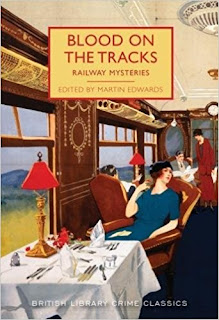 The British Library recently published its catalogue for the first six months of next year, and this gives me a chance to talk about some of the titles in the Classic Crime series that will be coming the way of fans of Golden Age fiction before very long. It's an eclectic mix, and one that personally, I'm very pleased with.

I've already mentioned on this blog that I've compiled a new anthology of classic railway mysteries, called Blood on the Tracks. In the past there have been a few railway-themed short story collections, but I've managed to track down some stories that I'm fairly sure will be unfamiliar to the overwhelming majority of readers, as well as some that may be known to aficionados, but deserve a fresh life.

Then there's the republication of Richard Hull. I've talked about Hull's work both on this blog and in The Golden Age of Murder (and, come to that, in The Story of Classic Crime - I guess you could call me a fan!) He was a disciple of Francis Iles, and a very interesting writer indeed. Two of his best books will appear next year: The Murder of My Aunt and Excellent Intentions. I'm pleased to say that, thanks to members of his family, the introductions will contain quite a bit of fresh info about the life of this most creative of crime-writing accountant.

I'm also delighted to say that there will be two books from another writer whom I've championed, E.C. R. Lorac - Bats in the Belfry and Fire in the Thatch. I was introduced to Lorac's work by my parents, who were enthusiastic about her later work, set in Lunedale. These two books were written earlier. Bats in the Belfry has a great setting in London, while Fire in the Thatch, as you might guess, is a rural mystery

Among the authors whose novels are republished in the Classic Crime series are quite a few whom I've long hoped to revive - Anthony Berkeley, Raymond Postgate, Christopher St John Sprigg, Anne Meredith, and Freeman Wills Crofts among them. Hull and Lorac are two more authors whom I really enjoy, and I am optimistic that these reissues will find a highly appreciative new readership.

Labels: Bats in the Belfry, Blood on the Tracks, E.C.R. Lorac, Excellent Intentions, Fire in the Thatch, Richard Hull, The Murder of My Aunt

I love this series. In fact, I hardly buy anything new these days. I have a lot of them in the original, thanks to my parents, but I've met so many more.

I’ve bought them all so far ... always eager for the new additions to the series.

That's great to hear, David, and there are some more very good ones coming down the line...

Looking forward to reading them ,I've got all the collection and its the only books I buy now and I'm enjoying it ,just keep them coming :-)

This series is a recent find for me, and I am devouring these volumes. Thanks for sharing the plans for 2018 releases. I hope it continues for a long time.

Hi Martin, thanks for the advance notice - the upcoming set of titles sounds very appealing. :) Is the catalogue for 2018 accessible to public eyes? I'm excited to know which Berkeley titles will be released... Hopefully 'The Second Shot' and 'Mr Priestley's Problem'?

Great to see these books being reissued - there is clearly interest, judging by the prices being asked on Abebooks for the very recent reprints by Ramble House!

Do you think we might see any of the titles she wrote under the Carol Carnac alias being espoused by the British Library? I don't know any of these which have been in print recently.

Thanks very much for these enthusiastic comments. As regards the catalogue, I can't see it on the BL's own website. The Berkeley book that has already been published is The Poisoned Chocolates Case. A couple more have been reissued by Harper Collins. I don't know of any plans to publish any in 2018, but as a big fan of Berkeley, my hope is that they will become available in the fullness of time.

Jonathan O, thanks for your enquiry. I expect that much will depend on the reaction to the first two Loracs. Quite apart from the Carnacs, there are quite a few of her mysteries that I'd like to see back in print. Whether they appear in the Crime Classics series will probably be governed to some extent at least by sales and reviews of Bats in the Belfry and Fire in the Thatch, and I'm keeping my fingers crossed that the response will be very positive.

I'll certainly buy Bats in the Belfry, and possibly Fire in the Thatch as my current copy is in very poor condition!