The Mortmain Hall cover and the Gallows Court monthly deal 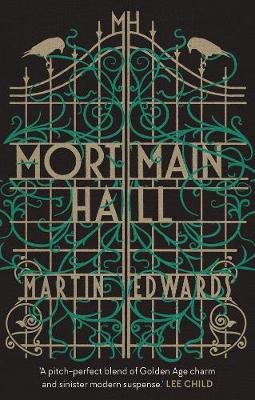 The hardback cover of Mortmain Hall, the sequel to Gallows Court, has just been unveiled. What do you think? The artist, Edward Bettinson, was appointed by Head of Zeus in view of his track record of producing top class cover artwork for a whole range of writers. It's often said that you shouldn't judge a book by its cover, but there's no doubt that covers count for a great deal in book marketing.

I've told the story before of how, when my first book was published, I was startled to be told by a Transworld rep that covers counted for more than content in his experience. I'd like to think that in the long run, that is not true (and I really don't believe it is) but in the short term, a cover helps to attract interest and to sell books. So I'm keeping my fingers crossed that Edward's design meets with widespread approval.

Mortmain Hall is published in the UK in April and I'll be telling you more about it nearer the time.

On another note, I'm pleased to say that Gallows Court has been selected for the Kindle monthly deal. So if you're interested in an ebook version at very modest cost (I think this promotion is limited to the UK, by the way), now is your chance...
Posted by Martin Edwards

Splendid atmospheric cover. So many covers these days seem "identikit" - with clip art figures and backgrounds pasted together by teenagers. Proper design makes a big difference. As someone who tends to read novels mostly on e-readers these days I lose out on covers big time.

Mister Tolley, thanks for dropping by and I'm so glad you like the cover.