Loughborough and the Academic World 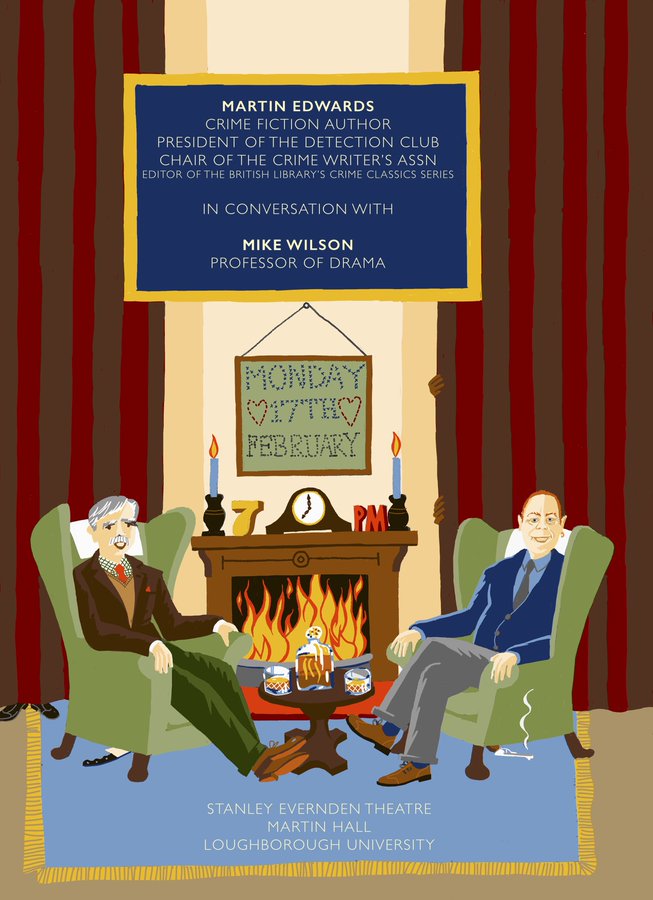 I'm just back from a fascinating trip to Loughborough University. Thanks to the good offices of Professor Mike Wilson, I did a couple of events, one a public talk, the other an extensive workshop with Mike's third year students. The students are working on a dramatic version of Farjeon's Thirteen Guests, and I was very interested to hear the take of these young, thoughtful people on Golden Age fiction. Their positivity was refreshing and my visit as a whole very enjoyable. I was also greatly entertained by the poster designed to promote the event...

Nor is this to be my only encounter with the academic world this year. In April I'm taking part in a Golden Age weekend of events organised by the University of Chester. And later in the summer, the Routledge Companion to Crime Fiction will be published; an academic tome, with many contributions from academics - plus me.

My interest in the academic world goes back a long time. In my younger days, I thought seriously about becoming an academic and once I started to train as a solicitor, I wondered if I'd be better suited to lecturing and researching rather than working in a legal office. In either case, I wanted to pursue my dream of becoming a crime novelist, but I thought the academic life might be more conducive to that. So I went for lunch with one of my tutors at Balliol, a wonderful New Zealander called Don Harris, for whose judgement I always had the greatest respect. We talked it over, and he persuaded me that, at that time, the uncertainties of academic life were unappealing. So in the end I stayed in the legal profession, and it worked out well - in the long run.

I continued to write the occasional academic article, as well as more prosaic stuff for newspapers and magazines. And in recent years, as academic interest in crime fiction has risen, so my contacts with the academic world have increased. I very much enjoyed being part of Steven Powell's seminar on James Ellroy at Liverpool University a few years ago and I'm keen to see closer contact between crime novelists and academics interested in the genre.

There is some fascinating research going on, and some very good writing, but at present it seems to me that there's also some surprisingly poor writing in the academic field, stuff that - whatever its intellectual merits - is desperately boring to read, because some authors seem to pay more attention to things (such as bibliographies and other references) which try to show how well they have done their homework, rather than writing accessibly and in a way that others will find inspiring. I understand that part of the thinking is to assist future researchers, but the balance often seems to be tipped against good prose, a strange example for teachers to give to students. Thankfully, the likes of Steven Powell and Mike Wilson recognise the importance of communicating clearly, widely, and well. I'm optimistic that a similar approach will be followed by more and more academics in years to come.
Posted by Martin Edwards

And your post here too, of course--glad to hear all the good stuff you're up to.

Thanks, Art. I really did enjoy seeing that poster!

Hi Martin, Just wondering if you'll be at Southend next month and if so what talks you'll be attending/hosting? Also, while I remember have you had a chance to read the copy of the letter I wrote to W J Burley that I gave you at Southend last year? If you have what did you think of it? Hope to see you at Bodies in July.

Hello, Jamie, great to hear from you. I'm afraid I won't be at Southend this year. Thanks for reminding me of the letter. I have a confession to make which is that after talking to you, I left it in the room and it was picked up by one of the organisers. She wasn't around after that and it was agreed she'd send it to me. As far as I can tell this has perhaps slipped her mind. I'll get in touch with Seona and see if it can be tracked down. Sorry about that. It was caused by my carelessness in leaving it in the room in the first place.

The Loughborough poster makes me laugh too. Is that a vital piece of evidence going up in flames? The guy on the left with the Crippen ‘tache looks decidedly shifty!

Perhaps you’ve always had one foot in Michael Innes’ academic world? I suspect your crime fiction might have taken a different direction though had you been fully immersed, with no Harry Devlin, Hannah Scarlett or Rachel Savernake. That said, I’m certain you’d never have sacrificed good prose in your non-fiction for pernickety academic referencing; your studies of Golden Age and Classic Crime are proof enough of that.

Just now I’m watching like a hawk for tickets to Alibis 2020 going on sale at Gladstone’s, ready to pounce when they do!

Thanks, Paul. Look forward to seeing you at Alibis!

Love that poster! Hope you got your own copy.