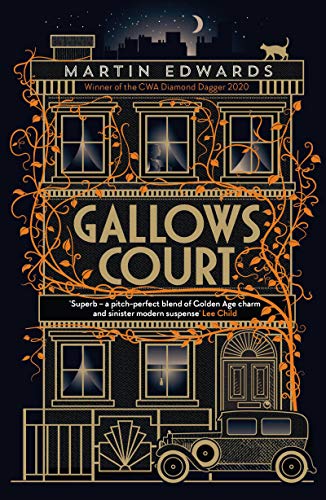 Today - a cover reveal of a slightly unorthodox sort. The artwork for the UK edition of Gallows Court has been given a makeover. This is, in a nutshell, because Ed Bettison's cover for Mortmain Hall has received a great deal of acclaim. As a result, my publishers in Britain, Head of Zeus, decided that it would be a good idea to commission fresh artwork for the first Rachel Savernake from Ed. And this is the result. As you can see, it's very different from the original artwork, and very much in keeping with the approach that Ed adopted when working on Mortmain Hall.

I find this absolutely fascinating. I'd never appreciated the importance of book covers until that fateful day when a rep from my first paperback publisher, Transworld, told me that in his job they mattered more than the content! This came as quite a shock to a young novelist who'd just had his first book published. But even if he was exaggerating, there was a kernel of truth in what he said from a commercial point of view. Much as authors may not want to hear it, artwork is crucial in helping to market books, and is very relevant to the commercial proposition. And nowadays the artwork has to be effective as an online thumbnail icon as well as in reality. Not easy...

I must say that I did love the original artwork for Gallows Court, and the publishers went to a great deal of trouble in their efforts to get it right. They also did a brilliant job with the special limited edition, which didn't have a dust jacket, but was quite beautifully bound. The paperback cover was a sort of homage to the Crime Classics, and again a lovely picture. But much as I loved those first edition images (and I did), I must say that the enthusiasm with which readers and reviewers have, without any prompting, reacted to the Mortmain Hall cover has been remarkable. Hence this new look.

I do love the cover for Mortmain Hall. But this one for Gallows Court is really gorgeous. I like books almost as much for the cover as the content.

It is a real pleasure to see decent artwork on a book cover. For some time now publishers of crime fiction seem universally to have settled on a common template: for example, the covers of British stories that are set in villages and have a woman as their protagonist (but do not involve murders of children) all have photographs of estate-agent-friendly old cottages, rather nice manor houses (now country house hotels) and 'typical' village streets. Irrespective of where the stories are set the photographer appears to have shot all his pictures in the Cotswolds, that upmarket cauldron of jolly murder and mayhem - an impression enhanced by their having a mellow golden tinge so that they can be marketed as cozy mysteries.
The books that do deal with grimmer rural stories such as the disappearance of children, rape, torture and explicit violence have equally clichéed covers: in the dead centre is a road or path that is in, or disappears into, a dark forest or similarly threatening landscape. Imposed on the road is a small figure that almost always has its back turned to the viewer and is wearing a black or sometimes blood-red coat. Psychologically it is undoubtedly a powerful image of impending, unstoppable loss but it is losing its impact through overuse.
So congratulations to your publisher and the handful of others who are prepared to commission intriguing and even beautiful covers, such as those for Anthony Horowitz's recent books, and Sophie Hannah's Poirot sequels (which I unfortunately find unreadable).
PS I gnashed my tooth when I first saw that phrase cozy mysteries. Horrible American marketing-speak...then I looked up cozy in the OED and found that was the way Queen Victoria spelt it...

Thanks for these comments. Mike, good points about the standardisation of so many covers, perhaps especially in paperback editions. Nice observation about Victoria too!