Quite a few crime novels have been set, in part at least, on or around Bonfire Night. This is hardly surprising, given that (except during a pandemic and a lockdown!) it's a time of vivid colours in the night sky, with the potential for crime in the hours of darkness. Several authors have had the idea of a Guy Fawkes on a bonfire turning out to be a murder victim. I doubt they have copied each other - it's just one of those concepts (and there are loads of them) that are quite likely to spring to mind when one is thinking up scenarios for a murder mystery. 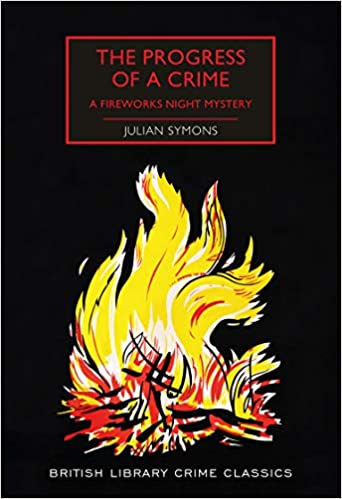 Julian Symons' The Progress of a Crime, which is the subject of a timely reissue in the British Library Crime Classics series, is proclaimed on the suitably vivid cover as a Fireworks Night mystery, and that's when the eponymous crime occurs. The case is investigated by a young journalist, and Symons actually worked in a provincial newspaper office as part of his research. The crime in question was based, as I explain in my intro to the book, on a real life case which many people think gave rise to a miscarriage of justice - a subject that was of great interest to Symons at that stage of his career.

The book won the Edgar for best novel, and came close to winning a Gold Dagger for good measure. At this point Symons' career as a novelist was really at its peak in terms of acclaim and awards, but he continued to write extremely interesting fiction until the end of his life. The Colour of Murder, which did win a Gold Dagger, and The Belting Inheritance, one of his less well-known novels, have previously been reprinted in the Crime Classics series.

The Progress of a Crime has particular significance for me since it was the first Symons novel that I read, at the age of thirteen or so. It was also, as far as I can recall, the first time I'd graduated to contemporary crime writing after cutting my teeth on Christie, Sayers, and company. An old paperback copy was on the shelves in the house of some family friends and I picked it up and started reading it when I got bored with the adults' conversation. I was intrigued, and soon became a big Symons fan - after reading The Man Who Killed Himself. It's terrific to see him back in print again.

I am surprised I have not heard of this book, since it won an Edgar, but I am glad you have introduced it to me now. I have read at least one other book that features Bonfire Night (Funeral in Berlin) but I will definitely seek this one out to read. (My birthday is on November 5th.)

A belated happy birthday, Tracy! This is definitely worth a read in my opinion.