Forgotten Book - The Killing of Francie Lake aka The Plain Man 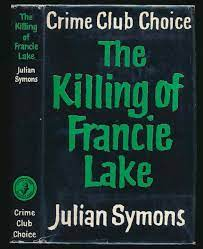 Julian Symons was a severe judge of his own work, as well as (sometimes) that of fellow authors. He recognised that, as a novelist, he was himself inconsistent. Sometimes this was because of his determination to try something different. Occasionally it was because his novels didn't have a strong enough central idea. And sometimes he was too harsh on himself - for instance, he was rather dismissive of The Plot Against Roger Rider, a book I rate highly. But I'm afraid I share his disappointment with a novel he published in 1962 and dedicated to his friend the thriller writer George Sims, The Killing of Francie Lake.

The central character is Octavius Gaye, known as Ocky, and nicknamed 'The Plain Man'. Symons had written a biography of Horatio Bottomley, and in this novel, as well as in The Paper Chase, he fictionalised Bottomley. One problem is that, although I agree Bottomley was a fascinating rogue, I find Ocky a slightly unsatisfactory character. Another problem, which I don't think any other commentator has ever picked up on, is that in many respects this novel reworks various elements from Kenneth Fearing's The Big Clock. And it's markedly inferior to that chilling American classic.

Ocky, like Earl Janoth in The Big Clock, is the charismatic kingpin of a media organisation that is running into difficulties. There are other similarities, though I want to avoid spoilers, so I'll say no more. Francie Lake is Ocky's hard-bitten but lonely former mistress. An odd feature of the book is that Francie is thinly characterised and that the mystery about her murder is subdued, while its investigation is half-hearted and entwined with a rather drab sub-plot involving blackmail. The American title of the book, although dull, is at least more accurate in emphasizing that Symons was more interested in Ocky than in Francie.

There are quite a lot of characters in the story, but none of them are really memorable. The pivotal scene in which the truth is revealed on live television is very nicely conceived, and it's a pity that, because of the unsatisfactory build-up, it doesn't have quite the powerful impact that Symons no doubt hoped to achieve. The snag is that we don't really care enough about Ocky or the people who surround him and whom he seeks to manipulate. Even for a Symons fan like me, this book has to rank as a misfire.

Ted, it's a very long time since I looked at Immaterial. Maybe it's due another try. I like the three Victorian books, perhaps being least keen on Detling. But the first two are very good.