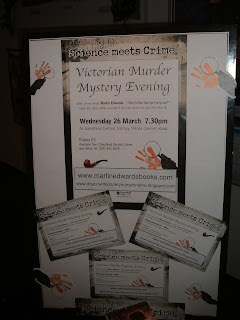 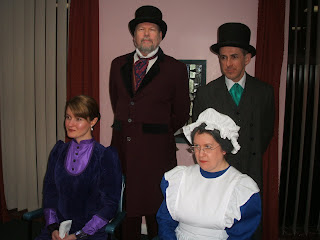 I’ve just returned along rain- and wind-swept motorways from a tour of the North East of England, combining a holiday with four performances of my Victorian murder mystery event, ‘Who Killed George Hargrave?’ I’ve never done anything quite like this before, and before setting off, I was rather daunted by the prospect of conducting four events on consecutive days. As things turned out, all went well.

First stop, on Wednesday evening, was Gateshead Library. The only time I’d visited Gateshead before was to watch a football match – nearly forty years ago – which proved, if memory serves, to be a rather tedious game. This was a very different experience.

The library boasts an excellent theatre and Dot Cameron and her colleagues among the library staff had done a great job of achieving a sell-out audience of 120 – about the largest audience that is practicable for an interactive event like this, as I spend the interval discussing the mystery with members of the audience, giving clues and offering the occasional red herring. Excellent performances and smooth organisation made for a thoroughly enjoyable evening.

Plentiful book sales also helped, but that isn't the main point of the event (honest!) The chance to talk to a sizeable group of mystery fans is always appealing, and I've found that the mystery event attracts much bigger crowds than a conventional talk. A talk - about locked room mysteries - forms part of the event, whilst the audience's solutions are being judged, but there's no doubt in my mind that people prefer, given the choice, to have some involvement in an event, rather than simply be 'talked at'.

Hello Martin. Sounds great. Just letting you know I've put my review of THE ARSENIC LABYRINTH up at http://paradise-mysteries.blogspot.com/2008/03/arsenic-labyrinth-martin-edwards.html
Cheers

Yes, it sounds fascinating. Maybe you will venture in a slightly southerly direction for the next tour -- just as wet and windy, though, I'm afraid.

Kerrie - a very kind review; many thanks.