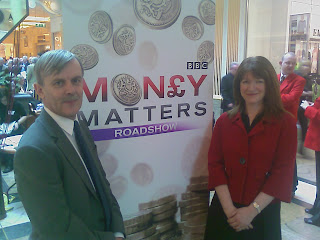 Something completely different yesterday – ten hours spent in the unlikely setting of the Trafford Centre, the huge shopping mall on the outskirts of Manchester, surrounded by BBC cameras, microphones and presenters. All very strange, and rather hard work, though certainly interesting.

It wasn’t, unfortunately, anything to do with the BBC filming one of my works of fiction. In fact, they had decided to respond to the economic crisis by taking their ‘Working Lunch’ television show and various radio programmes such as 'Money Matters' out of London, to see how people were coping and arrange for them to be offered help. The idea was to bring together a couple of dozen expert advisers and match an adviser to each problem raised by a member of the public. Most of the advisers were finance people, debt advisers or charity workers who help people with difficulties in a variety of sectors. I was there to offer guidance people who face redundancy, or have other work-related difficulties. (Some years ago, I wrote a book called How To Get the Best Deal From Your Employer, a title which I confidently expect nobody reading this blog will ever have encountered.) Anticipating that ten hours of this would be rather challenging, I invited a colleague, Anne Greenwood, along and was I glad to have back-up.

As it turned out, the questions raised were many and various, and gave me a vivid insight into the difficulties being faced by many people – not just those in debt or out of work, but those who see hard-earned savings being eroded through no fault of their own. All very thought-provoking. I did three BBC interviews in all during the day, although the closest I came to appearing on telly was when the camera panned round the advisers, who were all in the rather quirky setting of a zoo-like pen situated between a department store and a gushing fountain, while a long queue of people with carrier bags and rucksacks full of the paperwork about their problems waited patiently to be seen,

I kept an eye out for BBC drama producers hunting for novels that deserve to be televised, but they’d all stayed at home. Never mind. It was an unusual day, one to remember.

Labels: BBC, How to get the best deal from your employer, Money Matters, Trafford Centre, Working Lunch

It can be a dodgy business telling someone whom you think they look like, but, really, Martin, you and Michael Gilbert...

Lawyer DNA, perhaps? By the way, the BBC has just put the video interview I did on their webpage for Money Matters. Right now, I'm reflecting that there can be few more sobering things than watching oneself on video!

I don't know what's up with them now, but I can't get any BBC site to download this morning. However, I did see on YouTube a while back your interview on Legal TV, I think it was, re the Arsenic Labyrinth, and I thought you came across quite splendidly there. Very relaxed, debonair. Exactly thirty years ago, I was interviewed on the Canadian Broadcasting Corporation evening news re the Cambridge Five and Anthony Blunt's exposure as the 'fourth man'. A friend with quick reflexes managed to tape it and I haven't listened to my own voice since. It was actually my first interview, I had only a few hours notice, I was a trifle nervous, and I still managed to sound like the most pompous prat you ever did come across. The idea of a video interview is just nightmarish.

Fascinating post, Martin, and great that the BBC has provided the video so prominently. I understand how those people feel, as I suppose I am one of them, and it is great that people such as yourself are prepared to give up your time to help. (Maybe I shoudl watch that video!)
I really hope word gets around the BBC about your "other job", I would love to see a film version of Hannah Scarlett, and especially the scenery!

Years ago I was involved in politics and had to train appearing in front of a camera. No problem there; everybody thought I looked cool and controlled. What they didn´t really notice was the fact that I wasn´t able to answer my question at all :D

My DIL (an attorney) is in special training to help people with foreclosures here. She can't believe the mortgages they're saddled with. Their houses worth half what they paid for them and the rates going up daily.

Many thanks for these very varied and interesting comments. The latest development is that the BBC have asked me to write a 'chatty' article about redundancy. Another displacement activity instead of getting on with the current novel!