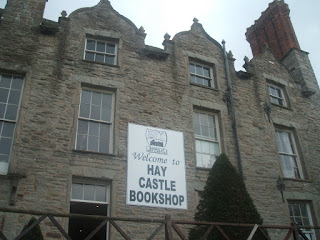 In the September sunshine, Hay-on-Wye was as appealing as ever yesterday. It was my first visit for eighteen months to the book town on the England-Wales border. I really have to ration myself, not least because I just don’t have the space at home to accommodate too many more books. But Hay does have an irresistible attraction as far as I’m concerned, and I did try to ration my purchases, with a degree of ‘success’.

My impression is that, since it became famous as a booktown, Hay has thrived economically. Whereas the streets of so many market towns in England and Wales have empty retail units and countless charity shops, Hay has plenty to offer quite apart from books. But books, of course, predominate. Even the half-ruined castle has been turned into a rather splendid bookshop – there could be no better use for an ancient monument!

As usual, I made a pilgrimage to the specialist crime shop, Murder and Mayhem, and also to the vast Cinema Bookshop, as well as a wide range of other haunts. One recent book I picked up was Sharp Objects by Gillian Flynn, which I’ve heard is pretty good.

My other purchases included an obscure (but apparently most intriguing) example of Eurocrime, and a rather fascinating piece of crime fiction- related memorabilia. More about these in future posts. And I hope that soon, Blogger, which has become mysteriously unco-operative, will allow me to upload some of the photos I took in the Hay sunshine yesterday!

So you have had your own harvest festival there :D
I would love to visit those bookshops, but I was engaged in another kind of harvest festival in our local church today. The church was full, and beautifully decorated - a true Midsomer-setting but happily without all the murders.

I am looking forward to your photos of sunshine in Hay on Wye, a very rarer event in our experience.;o) But heavy rain is the best excuse to browse the wonderful bookshops all day long.

Are your mystery-specific bookstores in financial trouble? Ours here are closing in record numbers. Very sad...

Elizabeth, I'm sorry to say that a good many bookstores in the UK seem to be grappling with threats to their survival - in fact that is one of the reasons why Hay is such a wonderful place to visit: it is bucking (or bookiing?) the trend. Murder One, the leading UK mystery store, closed earlier this year, though I gather it now operates on a mail order basis.

Dorte, a harvest it was! Though a small one...

Hi Uriah. I have certainly visited Hay in torrential rain, so I know what you mean. I'm not sure why Blogger is refusing to let me upload photos, but it seems I'm not the only one afflicted this weekend.

What did I miss LOL? I'm looking forward to hearing about the mysterious eurocrime book :).

Recently, I've been going there about once every 3 months. It's such a lovely place to visit.

It certainly is lovely, Karen. More about the Eurocrime book soon. Does the name of Frederic Valmain ring any bells?