Dancing in the USA 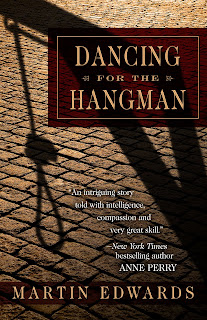 This year has been rather strange in some ways, not least because I haven’t published a brand new novel. My last book came out just before the end of 2008, and The Serpent Pool will appear next February. But I have had some overseas publications to celebrate, and I’m pleased that Dancing for the Hangman will appear under the Five Star imprint on 9 December.

I know that I’m very fortunate, in the current climate, to have books published by two American publishers. While Poisoned Pen Press have done a fantastic job in bringing out, and publicisng, the Lake District Mysteries, and Waterloo Sunset, Five Star published the first two Harry Devlins as well as the new book about the misadventures of Dr Crippen.

The reviews of Dancing in the UK were great, and the first American review has just appeared, in advance of publication. Booklist calls it ‘a clever reappraisal of the case’ and concludes: ‘Alternately funny and unsettling, the book examines the historical record, filling in some of the gaps and offering up new answers for some of the case’s key questions. An excellent example of the nonfiction novel.’

You can never be sure how reviewers will react to a book, however much you care about it and believe in it. Dancing is very different from my other novels, but it is a book which I am particularly proud to have written, and so it’s all the more pleasing that the critical response has been so positive.

I'm very happy for you, Martin - This is the kind of book that really appeals to me, too. I've always been really interested in the Crippen case, and very much look forward to the U.S. release of Dancing for the Hangman.

In these times of crisis it is so encouraging to hear that some authors do well!

Congratulations on your well-deserved progress overseas!

Great! Looking forward to your release in the States.

I know quite a few authors with Five Star and they've been very happy...great library distribution, there. Poisoned Pen is great too!

Many thanks for these comments, and welcome to the blog, signlady217!