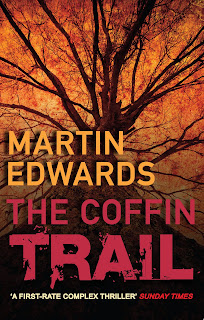 I don’t have the statistics at my fingertips to prove it, but I suspect that, commercially, The Coffin Trail is my most successful book to date. It’s often the case that the first book in a series is an author’s most popular, even if later books are ‘better’ in various respects. Many readers like to start with the first in a series, so it’s likely – all other things being equal – that sales of that title will be highest.

Another reason why The Coffin Trail did well was that it reached the shortlist of six for the Theakston’s Old Peculier Prize for best crime novel of 2006. The award ceremony at the Harrogate Festival that year was hugely enjoyable, even though I realised from the outset that, given the shortlist included Ian Rankin, Val McDermid, Stephen Booth and Susan Hill, it wasn’t likely that I’d carry off the prize.

For some time, though, The Coffin Trail has been out of print in the UK. Good that it's sold out, but still very frustrating! So I’m truly delighted to say that Allison & Busby will be reissuing it, to coincide with the publication of the fourth book in the series, The Serpent Pool.

What is more, they have decided to go for new cover artwork, and I’m very pleased with it. Here is a preview.

Incidentally, I’m sometime asked which of my own books are personal favourites. They are: Yesterday’s Papers, The Devil in Disguise, Waterloo Sunset, Dancing for the Hangman and now The Serpent Pool. As for The Coffin Trail, I’m thrilled that it is about to have a fresh lease of life.

Labels: Dancing for the Hangman, The Coffin Trail, The Devil in Disguise, The Serpent Pool, Waterloo Sunset, Yesterday's Papers

I very much enjoyed The Coffin Trail Martin

Love the cover, Martin. I'm glad it's being reissued.

I think it's great that you mentioned your favorites! Most authors say it's like choosing among their children, but I don't agree. I think there's one on your list that I haven't read, so I'll pick it up. Thanks. :)

To be listed alongside the likes of Ian Rankin is amazing for a first time author. No wonder The Coffin Trail is being reprinted. It should never have been allowed to go out of print. I've not read it yet and am looking forward to it.

Hope you enjoy it, Bernadette!

Thanks, Elizabeth and Leigh - much appreciated.

I just read a Jon Breen article I was sent that picked Dancing with the Hangman as one of the best crime novels of the year.