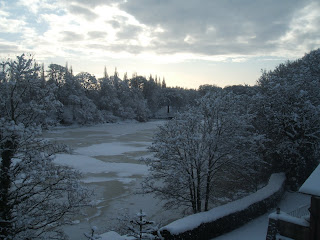 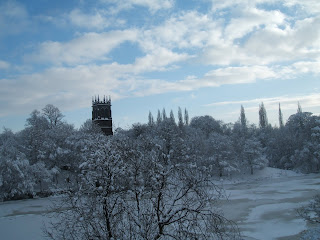 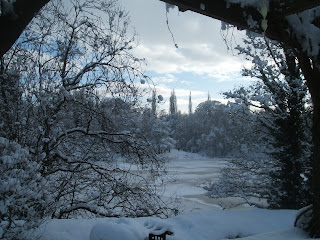 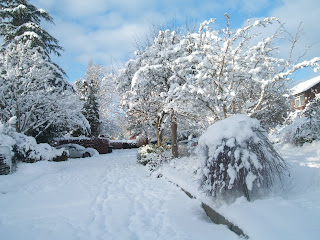 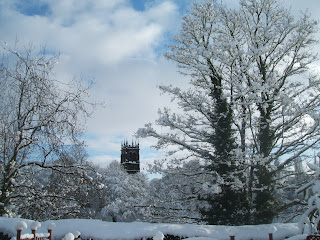 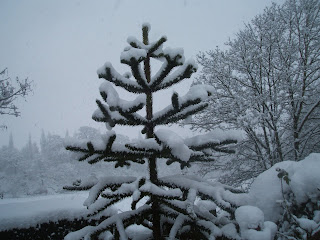 I don’t remember snow like this in Cheshire since my schooldays. Lovely to look at, even if massively inconvenient as regards commuting to work or hospital visiting. Yesterday evening, the dramatic weather prompted me to reflect on murder mysteries that I’ve enjoyed over the years where snow falls have played a prominent part in the story. One of the best in the last twenty years was Jim Kelly’s Death Wore White, a modern take on the classic locked room mystery, which I reviewed on this blog a year or so ago.

Snow also plays a background role in Cyril Hare’s An English Murder, a classic whodunit, and one of the finest of all mysteries set at Christmas, which dates from 1951. It was based on a radio play that Hare had written three years earlier; this was one of a series of six plays written by member of the Detection Club, and it would be wonderful if some enterprising publisher could one day republish them all.

An English Murder features an appealing amateur sleuth, Dr Bottwink, who is very different from Hare’s regular characters, notably the sceptical barrister Francis Pettigrew. It’s a thoroughly enjoyable story, which I first read more than twenty years ago. At the time of his premature death, Hare had just started writing another novel featuring Dr Bottwink, and a few years ago, I had the privilege to be shown the very short incomplete manuscript by Hare’s son. It was utterly fascinating to see it, although Hare wrote so little of it that it was impossible to figure out the nature of the mystery, far less the prospective solution.

A couple of years ago, I co-authored with Philip Scowcroft for CADS an article about Cyril Hare, and anyone interested in this fine writer (who is referenced in the latest P.D. James) can find the piece on the articles page of my website.

Snowbound? So that is what we are?

Gorgeous photos! But we have also got one meter of the white stuff in two days so my school is closed (and I should be writing crime fiction).

See you - when I have pulled myself together and written a scene or two.

We're even supposed to have flurries in the sunny South here tonight and tomorrow.

Beautiful photographs, Martin. I like the monkey puzzle tree.

Martin - Thanks for the reminder of An English Murder. What an appropriate story for you to profile with the weather as it is for you. Also thanks for the lovely photos. Where I live at the moment, we don't get snow, and as inconvenient and dangerous as it can be, I miss it...

Thank you everyone for these comments. I find it fascinating that the internet allows us this instant communication across the world, from places where snowdrifts are commonplace, to places where they are unknown.
By the way, Ann, I have added your blog to my blogroll.

Thank you. I've jotted down both titles. I read a light one this year called Christmas is Murder by C.S. Challinor where the inhabitants of a hotel are snowed in, and of course murders happen.

We may actually get some snow here in Louisiana during the next couple of days. I daresay it won't rival any of the snowfall you've had.

I read An English Murder a few months ago. A classic English murder mystery which I enjoyed very much--in fact, it almost made the top ten favorites I posted on Kerrie's blog. I do remember having one very small quibble about (POSSIBLE MINOR SPOILER) how the culprit got the bottle of poison out of the room after the first murder. Perhaps I missed how that was explained. But all-in-all, a wonderful read.

I've just started Jim Kelly's DEATH WORE WHITE - I thought it might make me feel a little cooler - while you're all freezing and snowbound we're sweltering in 41 degree heat down here. Oh for some nice middle ground :)

I have some online friends who are looking for books to read while snow bound, so I'll post a link over there to this. Some good ideas here.

Bernadette--it's about 41 degrees here in Louisiana today...but that's 41 degrees Fahrenheit! (Expecting it to get colder as the day progresses and cloud cover lifts.)

Thanks so much for the recommendation, and for the beautiful pictures as well.

Thanks very much for these comments. It's still very cold here!
Roberta - many thanks for the mention on your blog. The Wycliffe tv shows, like the books, are very under-stated, but interesting and certainly worth a look.

Love the photos - the church tower looks great above the snowy landscape.

I also have written a mystery and it is based on a murder that took place in my hometown. My book is Family Secrets or Lies by Debbie Steever. You can find it at Amazon, Borders, or Barnes and Noble online. I have another one entitled Dead at 30 that is going through the publishing process right now. It should be out in a couple of months.
Check me out.
Debbie Steever

Thanks, Scriptor Senex - good to hear from you.