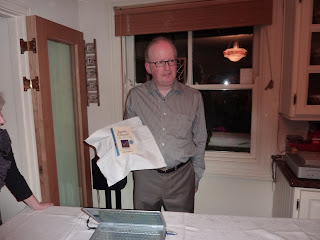 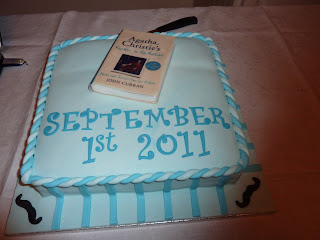 When Agatha Christie's Secret Notebooks, by John Curran, was published, I felt that it was the most fascinating book about the genre that I had read for a long time. The notebooks that John Curran has so painstakingly transcribed give a fascinating insight into the thought processes of the most successful crime writer of all time.

So when John invited me to attend the launch in Dublin of his follow-up volume, Agatha Christie's Murder in the Making, I seized the chance to combine the get-together with a long weekend in the Irish capital. And it all worked out marvellously well – even the weather was pretty kind.

The launch was held at a prestigious venue, the Civic Offices on the banks of the River Liffey, and was attended by well over 100 people. The following evening saw a private party hosted by friends of John at their house in Clontarf, which was another highly enjoyable event. Amongst the highlights, as the photograph shows, was the production (and consumption!) Of a cake featuring a facsimile of the book. Mathew Prichard, Christie's grandson (and the father of James Prichard, whose Langtail Press I have featured a few times in this blog) was present on both evenings, and there's no doubt that his support of the project has been crucial to the success of John's work, and that it has been absolutely justified by the dedication John has shown.

I'll be reviewing the book shortly, and I'm delighted that its publication gave me the excuse (if one were needed) for a brief but fascinating break. Dublin is a fairly compact city, and we covered a lot of ground in a short time. And, as unexpected bonus, whilst I was there I not only dreamt up a new short story, but got an idea for the title for my next Lake District Mystery.

I am just off to that very place, tomorrow, for a week!! One day we shall probably come face to face. You preceded me to Newcastle, too.
I am on a friend and family visit, not a literary one. I am so glad that the weekend went so well.

Martin – love your Dublin pics and write-up; sounds like a terrific weekend in great company. Amazing, isn’t it, how the grisly business of murder, transmuted into fiction by skilled practitioners of the art, can give rise ultimately to real-life events of a most civilised and pleasurable kind? It must have been with a sinking feeling that you returned to work on Monday morning!

I look forward to your review of John’s new book. And hope the short story you’ve dreamt up won’t be too long appearing.

Looking forward to getting a copy! The Secret Notebooks quickly became an indispensable reference source on Miss Lemon's shelves....

Hi Aguja, sorry I missed you!
Paul, many thanks.
Elizabeth, I'm sure you'll like Murder in the Making.