Editing a Novel - and The Frozen Shroud 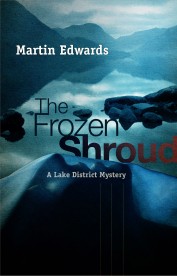 The Frozen Shroud, the sixth Lake District Mystery, concerns three murders, each committed on Hallowe'en, over the space of one hundred years. It therefore appealed to me to submit the final typescript to my American publishers and agent at around midnight on...yes, Hallowe'en. What I hadn't bargained for was the speed and efficiency with which my editor, Barbara Peters of The Poisoned Pen Press, would edit the manuscript. It was back with me inside 48 hours, which was quite remarkable. So I spent the past week-end going through the edits as I seek to finalise the manuscript for publication next year.

This prompts me to make a few observations about the editing process, and the relationship between author and editor. It's a hugely important relationship, I think. I've been lucky, over the years, to have had some very good editors (they include David Shelley, whose idea it was that I write a new series with a rural setting, and is now editing J.K. Rowling, no less). Barbara is outstanding, not least because she combines experience, insight and love of the genre with a sympathy for what one is trying to do and also with a willingness to tackle aspects of a manuscript that don't seem, to her, to work. It's this robustness of approach, coupled with empathy for the writer's work, that separates the best editors from the rest.

One reason why the final editing process was so quick and painless was that I'd submitted a segment of the first draft to Barbara some months ago. She liked it (in fact, at the time, she and my agent liked the book more than I did - I was going through the sort of crisis of confidence that afflicts many authors mid-way through a first draft) but she did raise a few issues. All but one of these was easy to deal with. The remaining issue was also fairly easy to deal with, but more significant, because in changing what I had written, I came up with a brand new idea which helped me to reconfigure the sub-plot of the book in a way which, I felt, worked much better than the original. This really gave me a big morale boost, as a part of the story that had proved worrisome suddenly became satisfying to me and, I hope, to future readers.

This is what the editorial process can do for a writer, and a book. It's for the writer, not the editor, to write the book, but an editor's wisdom can be invaluable. Because I never feel confident about my first drafts, especially when they are incomplete, I'm always a bit reluctant to share them, but Barbara's input had consequences for the reconstruction of the story that she possibly didn't anticipate. Her comment on one relatively minor issue sparked my imagination, and gave me, and the narrative, fresh impetus. There are some aspects of this particular novel that are quite ambitious, and for a long time I wasn't sure they were going to work. Thanks in no small measure to a terrific editorial relationship, I'm now looking forward to the publication of the book with an eagerness that, back in summer, I wouldn't have thought possible..
Posted by Martin Edwards

Martin - You are very, very fortunate to have a skilled editor and a productive working relationship with her. I couldn't agree more about the value of that relationship, too. It can make such a difference. I'm looking forward to The Frozen Shroud.

I wish every writer had a competent editor. I recently read a book where the word "infer" was used six times as a synonym for "imply." The writer should have known better--and so should her editor (assuming she had one).

Oh Martin, I pulled a book from my tbr pile the other day--the Black Dagger Crime edition of Margot Bennett's The Man Who Didn't Fly--and was pleasantly surprised to see you'd written the foreword. I really enjoyed it; I may write about it for Patti's Forgotten Books.

I feel that Barbara's editing has vastly improved our books. She never asks for us to change a book into something other than we intended. Rather she finds ways to make the book we wanted to write better.

Thanks, Margot. Some more editorial points have cropped up this week-end, but they are points well made, and I'll be tackling them!

Hi Deb, I hope you do write about that book, which is one I really like. Such a neat concept. Bennett was a terrific writer. I still don't know why she gave up.

Eric, great to hear from you. You have summed up her great contribution to a PPP book. And she has long identified, of course, the quality of the books you and Mary write.