My Year of Crime

New Year's Eve is a good time to reflect on the year just coming to an end, as well as looking ahead. First things first - I'd like to wish all of you a happy and healthy 2014, and to thank you for all your support during the past twelve months. For me, the past year has been a lucky one, with lots of interesting things happening. So today I'm going to indulge myself by recalling some of the crime-fiction related activities I've got up to in during the year - a reminder, perhaps, that one doesn't need to be a best-seller to enjoy the good life through crime writing. And I hope in the process of picking out some personal highlights to persuade myself that, despite relatively limited time spent novel writing. I've really not frittered 2013 away after all! 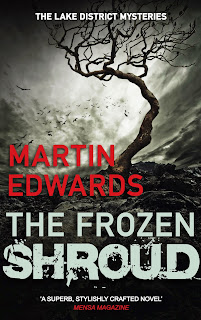 * The launch of The Frozen Shroud at Gladstone's Library was a trememdous evening in a truly atmospheric location. The reviewer reaction to the book has really gratified me. Plenty of people have said it's my best book to date. Whether that's so, I don't know, but I'm pleased that the result of my taking a slightly different approach to the writing process has gone down well.

* Publishing Deadly Pleasures, the CWA's Diamond Jubilee crime anthology, was also very satisfying. It's a privilege to be the first person to read wonderful stories by the likes of Lindsey Davis, John Harvery, Ann Cleeves, and Peter Lovesey.

* I was delighted that Arcturus reissued Yesterday's Papers as a "crime classic" and equally thrilled to find that their edition of All the Lonely People not only featured prominently in a display of classics in the British Library shop, but also earned a rave review in The Daily Mail, more than 20 years after its first appearnce.

* Speaking of the British Library, I've enjoyed writing introductions for a total of three of their Golden Age reprints, to appear in 2014, along with an intro for an ebook reissue of a legendary American crime novel. I've also written essays for Morphologies, and for a crime reference book due to be published next year.

* While I've under-achieved in terms of writing novels this year, at least I've produced quite a few short stories, including one inspired by a steam train trip to Whitby which appeared in Margot Kinberg's anthology, In a Word, Murder, and another inspired by a holiday visit to Grand Cayman, due out next year. 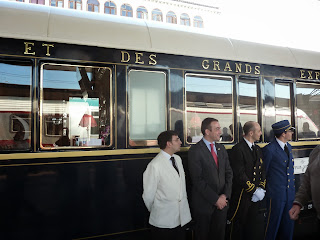 * One especially memorable holiday trip was on the Orient Express, from Venice to London. An exhilarating, once in a lifetime experience -shades of Agatha and Poirot...

* I never imagined when I wrote a paper on Golden Age fiction for the St Hilda's conference that as I delivered it, P. D. James would be sitting in the front row of the audience. But so it proved...

* I also had the great pleasure of sitting next to Baroness James at a dinner when she gave me a heads-up on her forthcoming article on the Wallace case, and this was followed by further conversation with her during a taxi ride through London's West End. An unforgettable night at the Detection Club, that was for sure, and so was a subsequent Club dinner at which I acted as Torchbearer... 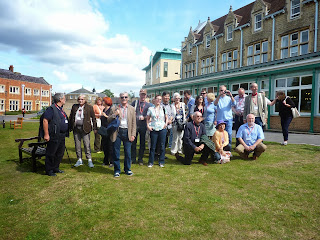 * I discovered a fresh pastime as a tour guide, leading a group of international crime writers on a literary tour of Oxford. This led, quite unexpectedly, to a commission to write a crime story for a new international anthology which should appear within the next twelve months.

* My first ever after dinner speech, to the Sherlock Holmes Society of London, proved to be a painless experience, and led to my meeting a very pleasant Society member who arranged for me to see Charles Dickens' legendary final manuscript at the National Art Library

* I was invited on to BBC Breakfast to talk about Agatha Christie, which was fun, and was interviewed on BBC radio about Broadchurch, the year's stand-out crime drama on TV. 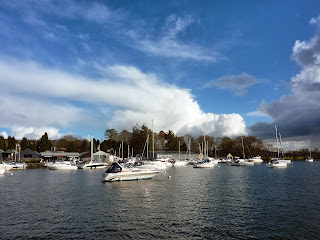 * It's more of a challenge to give a talk or lecture to one's fellow authors, I find - rather more nerve-wracking than the typical talk. So I approached my talk about the Golden Age at the CWA conference in Windemere with some trepidation, but in the end, all was well. Diane Janes organised the week-end brilliantly, and a boat trip on the lake was just one of the highlights. A trip to Wray Castle was another, while later in the year, a research trip to Ravenglass gave me lots of story ideas (I just need to write them up....) 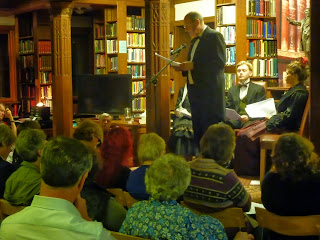 * Among other events, I took part in Gladfest, when Gladstone's Library proved to be the perfect setting for a performance of my Victorian murder mystery event.

* Crimefest was, if anything, better than ever, and I enjoyed moderating the Forgotten Books panel as well as being a member of the team that won the pub quiz, alongside old friends like Kate Ellis and new ones like Alexandra Benedict.

* This year saw the centenary of the birth of another notable Ellis, Ellis Peters, and I enjoyed taking part in the festival to mark the occasion. On the other other hand, I found it rather odd that the centenary of that great book Trent's Last Case was almost universally ignored.

*  The CWA Dagger Awards was an excellent evening, very well organised by Alison Joseph and Lucy Santos. I've now spent a year on the CWA committee - my colleagues are a really good bunch of people.

* I've read some terrific books, old and new, during the course of the yeat - it's almost impossible to pick out a favourite, but Andrew Taylor's latest was definitely up there with the best.

* And finally, this blog has prompted a great many very welcome comments and emails, introducing me - yet again - to some generous and really interesting people. Quite honestly, I gain much more from this blog than I put into it. I'm very grateful to you all for reading it, and making it such a pleasurable and interactive way of deferring the hard graft of writing the new novel! Sounds like a cue for a new year's resolution...

See you in 2014!
Posted by Martin Edwards

Just the best year!! Loved reading every word, and am happy for the acclaim you receive.

Phew, what a year you've had Martin. All that and a day job too. May 2014 be as enjoyable, and I look forward to our paths crossing.

Very kind, Nan. Thanks and all best for next year.

Happy New Year, Martin. You have had a productive year. See you at Crimefest, if not before. BTW, I've joined the Portico Library in Manchester. I see it's affiliated with Gladstone...

I'm not sure how you define frittering but this doesn't seem to be my definition of the word! Happy New Year Martin & best wishes for the coming year. You seem to have done an impressive amount of writing last year but another Lake District mystery is always welcome so don't hold back!

Happy New Year, Martin! And see you at Crimefest.

Just back from holiday, I belatedly join the chorus of congratulations. I discovered this blog only a few months ago, but have already received so many great Golden Age book recommendations and friendly chat about the world of crime writing. Very grateful that you have chosen to devote some of your valuable time here, and best wishes for a banner year of writing in 2014.

What a splendid "old" year you had, Martin. Happy New Year! If you wrote a short story with Oxford as the setting, please let me know which anthology it will be in so I can buy it. I love Oxford, having been there many times and taking a summer course at Oriel College several years ago, and I enjoy short stories.

And the essay for Doug's festschrift, how can you forget? ;)

Thanks very much for these kind further comments.
Curt, the festschrift is the crime reference book I mentioned along with Morphoologies and I do look forward to its appearance. What I did forget was the Christie plays I watched during the year - perhaps I should belatedly amend the post to include them.