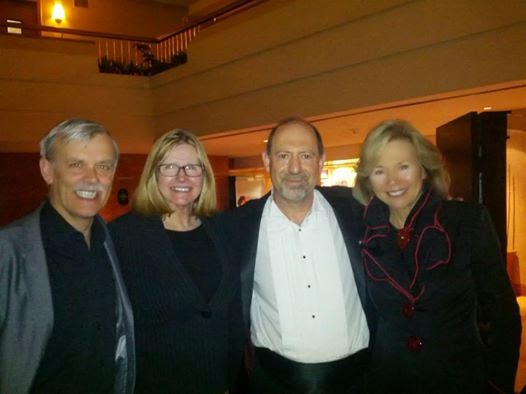 Whilst at Malice Domestic, I really enjoyed catching up with the Poirot Award winner, Tom Schantz of Rue Morgue Press (check out their excellent catalogue, which includes reprints of many otherwise hard-to-find mysteries of the past) and meeting his daughter Sarah, whose debut novel Fig has just been accepted by Simon & Schuster. It's a book I look forward to reading, and in the meantime her blog Magical Thinking gives an insight into her thoughts about life, storytelling - and daydreaming, which, as she says, is something that writers tend to do more than most.

Along with Tom, Steve Steinbock and Doug Greene (of Crippen & Landru publishers, and John Dickson Carr's biographer) form a trio of experts on Golden Age fiction whose knowledge is pretty much unrivalled. Steve organised a dinner last Friday evening which gave me the chance to catch up with actress turned writer Melodie Johnson Howe, whom I've mentioned before on this blog, and who among other things is one of EQMM's top short story writers. Our companions also included Doug, Charles and Caroline Todd (who won an Agatha the following evening, and who have contributed several short stories to anthologies I've edited), Nora McFarland and her mum, and another actress turned writer, Kathryn Leigh Scott.

Kathryn first earned fame appearing in a long running American TV show called Dark Shadows, which evidently retains a massive following, and her credits include films such as the 1974 version of The Great Gatsby. She is not only the first former Playboy bunny I've ever met, but also perhaps the only one who later set up her own successful and long-established publishing business. Like Melodie, Kathryn is great company, and I'm looking forward to reading one of her books. The photo shows me with Melodie, Steve and Kathryn.

Art Taylor is another leading contributor to EQMM, and his excellent story "The Care and Feeding of House Plants" won an Agatha - it's available online via the EQMM site and I urge you to read it. I met him for the first time at a meal organised by Janet Hutchings of EQMM, which also gave me a chance to meet Josh Pachter, whose newsletter about short stories I subscribed to back in the 80s, and whose anthology Top Crime I remember devouring about the same time. Josh is now doing a lot of translating, and it was great to talk to him, his wife Laurie, Janet and Art over the best brunch I've had in ages.

As ever with crime conventions, time passes all too quickly, and it's impossible to do everything. Ingrid Willis, who was there promoting this autumn's Bouchercon at Long Beach has really tempted me to sign up for that too. We'll see. Les Blatt, Jeanne M. Dams, Hank Philippi Ryan,Hannah Dennison, and fellow Brits Frances Brody and Helen Smith were among a good many attendees to whom I chatted all too briefly. All in all, a memorable few days. If you are a fan of traditional mysteries who has never attended Malice Domestic, I can recommend it unreservedly. The convention is brilliantly organised, and the atmosphere as friendly as anyone could wish. I hope tol be back there very soon.

What a wonderful write-up of Malice. It was great to see you there, Martin.