The British LIbrary, Crime Classics, and the Series Consultant...

The British Library's Crime Classics series is going from strength to strength, and I'm delighted to make one or two personal announcements about it today. First let me mention that the first half of next year will see the appearance of two anthologies of Golden Age fiction edited and introduced by me and forming part of the series. Resorting to Murder focuses on holiday mysteries, while Capital Crimes is a collection of stories set in and around London. I'm hoping these books will introduce a new generation of readers to some of the marvellous short stories published between the wars. Each anthology will include one or two rare stories that I suspect will be unfamiliar to all but the most dedicated specialists.

The Crime Classics series are beautifully produced; even so, I must admit their success has taken my breath away. I've been writing intros for republished crime novels of the past for about twenty years - starting with the late lamented Black Dagger crime series - but there's never been anything remotely this popular until recently (and the success of the Detection Club reprints by Harper Collins, a couple of which feature intros of mine is another welcome sign of the times.)

Who would have thought that novels written by John Bude and J. Jefferson Farjeon would become bestsellers in the twenty-first century? Not me, to be honest. And yet this is the British Library's achievement. A few days ago, Farjeon's Mystery in White reached number 4 in the Waterstones fiction bestseller chart, having risen from number 6 the previous week (Donna Tartt's latest being one place higher) . In the space of two months, 20,000 plus copies have been sold, and I gather that about 95% of this figure is represented by the print edition, rather than ebooks, which in  this day and age is very, very striking. Bear in mind that there is no living author around to promote their work on tours and so on. As for Bude, The Cornish Coast Murder has become the British Library's all-time bestselling book published under its own imprint - remarkable, if one thinks about that.. As of today, I gather it's sold upwards of 40,000 copies in all in about eight months. 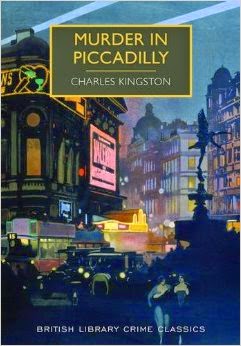 The British Library is now looking ahead, and giving careful thought as to how to sustain the remarkable popularity of the Crime Classics. For some time, I've been in discussion with them about possible future titles, and I've been commissioned to write introductions to recently published titles such as Charles Kingston's Murder in Piccadilly and John G. Brandon's A Scream in Soho. The aim of the intros is to offer readers some "added value", and the Library's view is that it's desirable to avoid duplication, so I write different intros for each book, even if the author has appeared in the series before, concentrating on fresh aspects of the author's work.

Other titles in the works include an excellent Bude book, The Sussex Downs Murder, and two particularly interesting novels The Hog's Back Mystery and Antidote to Venom, both by Freeman Wills Crofts. Five further  books are expected to appear in 2015, including a third anthology which I'm working on at present. Various factors (including availability of the rights) govern the actual choices made, but having suggested those two Crofts books, I'm delighted that they are to be republished.

I'm also thrilled to announce that the British Library has appointed me as Series Consultant to the Crime Classics series. It's a relationship which I'm really enjoying, and at long last, I no longer feel like a member of an endangered minority in my enthusiasm for these long-forgotten stories. Whilst I remain absolutely committed to my career as a contemporary novelist, I've been writing about Golden Age fiction for more than a quarter of a century (and reading it for much longer than that). I have never known a time when there was so much interest in the subject, not only in the UK, but much further afield, and this is also reflected in reaction to news of the forthcoming publication of The Golden Age of Murder (now available for pre-order on Amazon, by the way!) Long may it continue..

Congratulations Martin - well deserved and it is good to know that a knowledgeable enthusiast who is also a fine writer will be so closely involved. I must dig out my copy of the Hog's Back now....

My own favourite Crofts is the first crime story I ever read - The Groote Park Murder, but that is mainly for sentimental reasons I suspect.

This is all great news, Martin! (And I also add my congrats on the consultancy appointment.) I'm including some of the info on my blog, too.

Congratulations, Martin. I'm delighted to hear that the reprints are doing so well. They have certainly been selling well at Murder by the Book in Houston. If the series continues to sell well, I hope at some point they will consider A.E. Fielding and E.C.R. Lorac for reprint.

Well done, Martin!! They couldn't possibly have made a better choice!

Excellent news, Martin. I hope to see a lot more of these books from British Library. And your introductions are a welcome addition as well.

Congratulation Martin first and foremost - this is great news for all of us and I'm really glad you are being so involved! Can;t wait to see how these publications progress - bravo!

Really excited about this. Now all I need is more time (how you do it is a mystery to me) to read.

Congratulations Martin, I'm so glad about your appointment & about the success of the BL reprints. I think they've created a successful package - the right titles & beautifully produced books with attractive covers. The John Bude series especially tap into that nostalgic Englishness that so many of us on the other side of the world love to read about. Even though they're probably available as ebooks, I'd guess the physical books are probably selling extremely well because they're such lovely objects. I'm looking forward to all of next year's titles.

Many congratulations, and well deserved, I've been reviewing the series for Shiny New Books and always enjoy your introductions. Very much looking forward to your anthologies next year.

Congratulations Martin! The reprints are beautiful books and your introductions are so helpful.

What a cheering and happy post, Martin. I was in a real old-fashioned bookshop in Bath last week, and they had a nice pile of the Farjeon, with that gorgeous cover. I was fully intending to buy it as an ebook, but I just had to buy it there and then - for the bookshop, for the cover, and for you!

Thanks everyone for these comemnts and the interesting points made. Scott, I haven't read Groote Park; it's a very early one, isn't it?

Miranda, I've never read A.E. Fielding. Are thare any you would recommend? Lorac is an author I like, and I'll feature one of her books here before long.

Lyn, I think you're spot on, both as regards the "Englishness" point and the books being lovely objects.

Moira, thank you! It's really the surprise crime bestseller of the season. One of the strongest openings I've read in a while.

Those sales figures are astounding. I wonder if Open Road Media is doing as well over here. Somehow I doubt it. The demand is always for the modern on our side of the Atlantic. If only there were an imprint devoted to vintage mysteries that were as successful in the US! I'm not sure it's possible.

I nominate Clifford Witting and Vernon Loder as writers who ought to be reprinted in this series. Read any of my reviews on either writer for the best of their work I've read so far. Both of them hold up very well, I think. Witting is truly superior and underrated. His SUBJECT MURDER is very topical in these days of endless wars and military violence.