Antidote to Venom - another Crime Classic 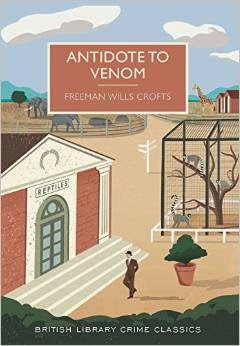 It's less than two years since I wrote on this blog about Freeman Wills Crofts' novel Antidote to Venom, and expressed the view that it was a book definitely worth seeking out. Well, anyone who likes the sound of the book will now find it much more easily, as it has just been republished as part of the British Library's Crime Classics series.

I mentioned on Monday that the publication of my British Library anthology Capital Crimes has been brought forward because of the scale of advance sales, and the same is true of Antidote to Venom. I've supplied this edition with an intro which outlines why I like the book, but it's perhaps worth adding a few words here.

One of the things I admire most in a writer is a willingness to abandon one's literary comfort zone, and try something different, and ambitious. I've often given the example of Anthony Berkeley, who in his Francis Iles novels in particular was trying to write a crime story of a new sort. A book like Before the Fact is deeply flawed, but for me, it's still worth ten pedestrian detective stories, because it was such a daring story idea.

The same is true here - and not only because of the very intriguing zoo setting. Crofts was being very ambitious with this book, and I don't regard it is a total success. But I found it a gripping read, and I am impressed that such a successful author was prepared to try to write about complex issues of good and evil in the context of an elaborate murder mystery. This is the reason why I was so keen for the British Library to republish the book.

I should say that in my role as Series Consultant, I come up with many book and author suggestions that aren't viable for one reason or another, and the Library also keeps digging into the vaults and finding books I wasn't aware of. But although Crofts was, in his day, a bigger name than Charles Kingston, say, or Mavis Doriel Hay, I'm glad that this book (and soon, The Hog's Back Mystery) are enjoying a new life. He was an interesting writer who deserves to be remembered.
Posted by Martin Edwards

To date this is my favorite Crofts book. So atypical of what we think of as his primary contributions to the genre (alibi breaking, prominence of trains and ships). I liked his "two-fold experiment" as he dubbed it in his Author's Note. I like to think my post inspired you to seek out ANTIDOTE TO VENOM though this may not be 100% true. Did you reproduce the map and the deadly murder weapon schematic in this reprint? Always like those touches in mysteries of this era.

Hi John. I've just had a flick through the book and the weapon illustrations are in, though I can't see a map. I agree entirely about the merits of this very unusual book. It may well be that your blog inspired me to read it, though to be honest, I often find it difficult to remember when I first read about (or more importantly, became interested in) a particular book. Books that you've highlighted that do stick out in my mind vividly however, are The Grindle Nightmare and I am Jonathan Scrivener. Both are fascinating, and I'm not sure I'd have got round to either of them without reading your blog.

In my Masters of the Humdrum Mystery, I discuss Antidote to Venom and Crofts' other inverted mysteries. It's a good place to go to learn more about Crofts. He actually did a number of inverteds, both in long and short form.

I like what I read here. So, Crofts and his works will be a perfect fit for my reading plans at my new crime fiction blog --

-- and I extend an invitation to you . . . perhaps you will visit and comment every now and then.

I'll have to seek this one out.