Alibis in the Archive 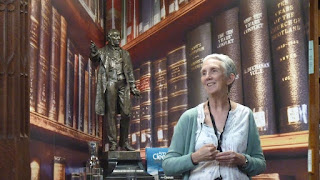 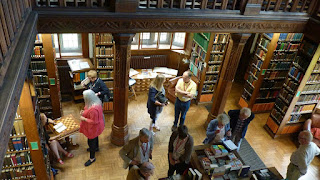 I'm back from an exhilarating week-end at one of my favourite places, Gladstone's Library in Hawarden. We had the Alibis in the Archive weekend event to celebrate the official launch of the British Crime Writing Archives - that is, the archives of both the Crime Writers' Association and the Detection Club.

We organised a packed programme, and the aim was to give delegates plenty of value for money Even so, we were delighted when the week-end sold out back in March -  only a few weeks after being announced. Capacity is limited, and delegates who couldn't be accommodated in the lovely rooms at the Library were able to stay at a nearby hotel. 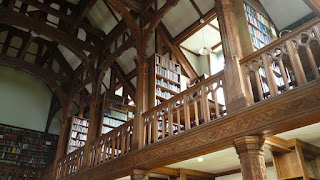 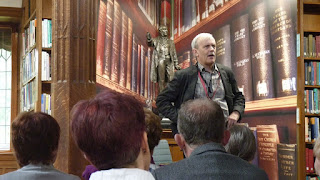 After dinner on Friday, the first event was an interactive murder mystery evening hosted by Ann Cleeves. This proved enormously popular. On Saturday, we kicked off with David Stuart Davies (who had acted in the murder mystery) giving a rousing talk about Sherlock Holmes. David Brawn of Harper Collins then talked about working with Agatha Christie's estate. I talked about the CWA and the Detection Club, and also their archives. And then Ann talked about Vera and Shetland. TV scripts that she has donated will in due course form part of the archives.

On Saturday afternoon, Rob Davies talked about the British Library, Linda Stratmann about poison, Kate Charles about clerical crime, and Kate Ellis about digging up the past. After dinner we had - yes! - a second murder mystery evening, this time hosted by Kate Ellis. Then on Sunday, Stella Duffy talked about Ngaio Marsh, Rob and I about the British Library's Crime Classics, and there was a panel discussion about Golden Age detective fiction. 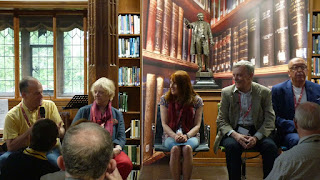 We were delighted with the convivial atmosphere, and the enthusiasm of the delegates. A new group of people previously unfamiliar with Gladstone's Library fell in love with it. I had the pleasure of meeting many nice people - including John Bude's daughter, Jennifer.- and also of seeing a project that I've been involved with for a long time finally achieve a very significant milestone. The Archives will develop in the years to come, and I am optimistic that they will become an increasingly important resource for people who are interested in the heritage of crime fiction. The photos illustrating this post were taken by CWA Secretary Dea Parkin, to whom many thanks. 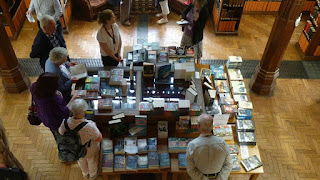 Hi Martin - very interesting article and I only wish I could have been there. Am I assuming rightly from the article that the archives of the CWA & The Detection Club are at Gladstone's Library in Hawarden or are going to be moved there? Like many readers of your blog I am a collector and reader of classic crime fiction - just like everyone else there are books I would love to read but have never seen a copy to purchase or one that is affordable. So it would be great to know that there is a library who holds that elusive book (even if you do have to read it in situ). Regards Jon

What a wonderful weekend! Many congratulations for this and all you do, Martin~

Hi Jonathan. The archives are now held at the Library, but don't comprise books. Rather, they comprise a mix of items relating to crime writing heritage. Correspondence, magazines (i.e. the CWA members' magazine), photos, and at a later date true crime materials. There are also the archives of Bob Barnard and Lionel Davidson as part of the Detection Club archive.

Gosh, Martin, what an amazing event ‘Alibis in the Attic’ was. Gladstone’s Library, so atmospheric with its gorgeous wood panelling and whatnot, was the perfect venue. All the speakers were brilliant and the inter-active murder mysteries were great fun. I seemed to spend the entire weekend back in the golden age with the shades of Sayers, Christie and Berkely et al ever-present; also Sherlock from the days of gaslights and hansom cabs of course!

And how marvellous it is that you’ve established the British Crime Writing Archive here with material from the CWA and Detection Club. I’m sure it’ll prove an invaluable resource for students of the genre.

On my feedback form I summarised the weekend as “hugely interesting and enjoyable”. Such a friendly, chatty event it was too with speakers and audience members mingling during breaks and everyone getting on splendidly! I may not have emerged a qualified crime writer but I do feel a more qualified fan! So a big thank you to you, Martin, your fellow panellists and of course the wonderful staff of Gladstone’s Library.

Thanks Martin for your reply.

I have often wondered if there is a group of collectors (and readers) of crime fiction novels that have a way of sharing copies of elusive titles that many of us would like to read but are unable to find or purchase - as well as sharing what we do have with others? For instance in your forth coming book The Story of Crime in 100 Books - there are two or three titles that I would like to read but are impossible to find/obtain e.g. Ellen Wilkinson's - The Division Bell Mystery & Alan Brock's - Earth to Ashes.

Jonathan, it's well worth considering the Barbican Library. I've met another Jonathan, who is heavily involved, and they have a great collection of GA books that can be borrowed.

How can I make sure I hear about this next year, martin? Apart from your blog! I had such a wonderful day on Saturday at the BL and would love to attend a longer festival: proximity to Chester might encourage my husband to come with me and so pre-empt any guilt I might feel at leaving him behind :)

I was interested to read that there is a Detection Club archive. Do you know whether there is information in the archive as to which restaurants in Soho the Club used to meet? I'd be grateful for any help on this.

Hello, Penny. I'm afraid that there isn't, though I touch briefly on this in The Golden Age of Murder. The Club's archive doesn't (at present) include much pre-war material.