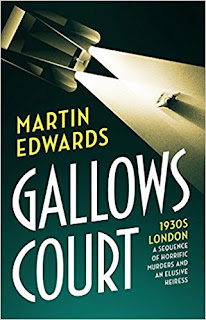 Today, I'm truly delighted to be able to talk about a book that has meant a great deal to me over the past three years. After many years of striving, I've finally managed to realise an ambition I've long held as a crime novelist - simply, to write a story that a major publisher loved enough to get behind in a significant way.

The book is Gallows Court, publication date is September 2018, and it will be the lead crime fiction title of Head of Zeus (whose other authors range from Ben Okri to Jim Naughtie) this coming autumn. For me, then, a thrilling development.

During the recent past, I've combined the writing of the novel with various other ventures, notably The Story of Classic Crime in 100 Books, and another non-fiction project which is still ongoing, and will be for some time. But I've always seen myself first and foremost as a novelist, and I've always tried to develop and progress as a writer of fiction. Writing this novel was an attempt to do something very different, in all sorts of ways, from my previous work.

Gallows Court is set in 1930, and it builds on my fascination with that period in our history, and my love of Golden Age detective fiction. But it's not a pastiche whodunit. Rather, it's a novel of psychological suspense, fast-paced, with plenty of plot twists.

In writing the book, I deliberately adopted a different approach from that of my other novels. Rather than planning out "whodunnit", I began with a character, and a scenario, and took things from there. This was a bold move, for me, which often felt as though it might prove foolhardy. But as I kept working on the story, it began to come together, and I found myself increasingly gripped by its potential.

I wrote the book without the comfort blanket of a contract or expression of interest from a publisher, because I wanted to set my agent the task of trying to finding a really good, fresh home for the book. In many ways, this was a real risk, because it's so easy to become typecast as a writer, and publishers do not necessarily want writers to change direction. Thankfully, Nic Cheetham of Head of Zeus "got" exactly what I was trying to do - an incredibly lucky break for me. I've worked with many lovely publishers over the years, and I must say that I'm exceptionally excited by this relationship. And I'm keeping my fingers crossed that readers will love the book as much as Nic did. The book cover image is subject to change, but I think it captures the period setting.

I'll be telling you more about the novel in the run-up to publication. Suffice to say at this stage that it concerns Rachel Savernake, an attractive and fabulously wealthy - but ruthless and mysterious - woman who comes to London and becomes embroiled in a sequence of bizarre murders. A young journalist, Jacob Flint, determines to find out her secret...

At the British Library the other day, I did a podcast with two splendid bloggers and locked room enthusiasts, Jim and Dan, and towards the end I talked a bit about the new book. Here's a link to the whole podcast - and do check out their blogs, The Invisible Event and The Reader is Warned, both of which are excellent.
Posted by Martin Edwards

Wow - I can understand why you are excited about this new project! Clearly it is the right time for a change of direction for you and (much as I want to see more of Hannah and Daniel) I wish you all the very best look forward to its publication.

Thanks very much, Fiona. And I hope you enjoy the book..

Oh, Martin, I am absolutely delighted for you! This is fabulous news, and I very much look forward to reading the book.

Martin, this is fabulous, well done, congrats and good luck. How wonderful. xx

Sounds fascinating, Martin. Nic was my editor when I was with Quercus - a delight to work with. Look forward to reading it.

This is great news for sure. I have been waiting for your next book as others have.

Please post when and if book will be available on Amazon.

Can't wait to read it. (And I KNOW the clothes will be good.... )Congratulations on achieving what you hoped for.

So exciting! Looking forward to it!

Any new works from your computer or pen, are welcome and we look forward to this new direction in your writing our our reading. When might the book be released in the states?

Exciting news, can’t wait. Good that all your knowledge of crime fiction is helping you take a new bold approach yourself.

What a wonderful announcement! I'm not sure how I didn't know that this book was coming out this September, but I am thrilled to know it now! I hope it's available at Bouchercon in St. Pete!

Very excited and much looking forward to it.

Hats off to you, Martin, for having the nerve to step off the beaten track with ‘Gallows Court’. Mind you, I’m not sure you could have done otherwise with such an alluring character as Rachel Savernake crooking her finger! Soon, I’m sure, we’ll all be holding onto our hats as we follow Rachel and young Jacob Flint down the misty byways of Golden Age London, with murder at every turn. What a treat! Can’t wait for publication.