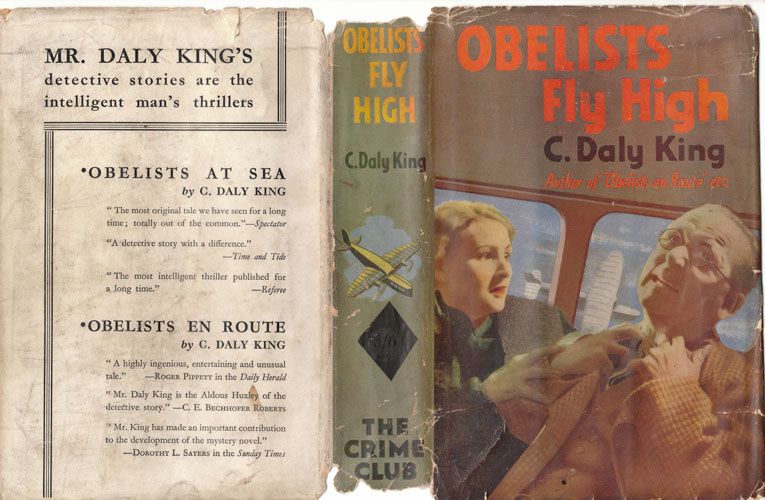 I first came across the name of C. Daly King in Julian Symons' Bloody Murder. Symons was notoriously dismissive of many Golden Age writers, although he admired Anthony Berkeley and Agatha Christie, and he clearly had a sneaking affection for King's work. I think he recognised that although King's stories were usually quite barmy and riddled with flaws of various kinds, there was something breathtaking and at times admirable about the sheer outrageousness of his use of the tropes of the classic whodunit. My feelings are much the same.

Symons felt, and again I agree, that King's most notable novel was Obelists Fly High. When introducing a 1980 reprint for Collins Crime Club (which had published several of King's books - first editions are rare and much sought-after by collectors; the jacket image comes from Mark Sutcliffe's site), he summed it up as "one of the most extraordinary detective puzzles of the twentieth century". It was the third of the "obelist" books, each of which involved a bizarre killing aboard a particular form of transportation: the first as on board ship, the second on a transcontinental express, and this one on an aeroplane.

There are three diagrams, one of them a plan of the plane. Then comes a "schedule of reported movements" of the passengers, because this is one of those books where timings and whereabouts of suspects are key. And finally there is a "schedule of actual movements", whose contents are naturally rather different. But there is more. The book begins with an epilogue. And it ends with a prologue. King was one of those writers who played games with the structure of the whodunit, and I'm sure Borges would have approved.

There is also a "cluefinder", a device I really love. Basically, it ties in with the idea of "fair play" in detection, and highlights clues in the text that the reader may have missed. It's sometimes been said that King originated the "cluefinder", which isn't the case, although the example in this book is my favourite. J.J. Connington came up with one before King turned to fiction, and his example was followed by others, including Freeman Wills Crofts. If there was an earlier pioneer of this device than Connington, I'd be interested to know, but I'm not aware of one. (Similarly, whilst other writers have begun their books with an epilogue, has anyone else ended with a prologue as well?)

What of the story? Well, it involves a threat to kill a famous surgeon. Michael Lord, King's series cop, is tasked with guarding the surgeon, but suffice to say that he doesn't make a good fist of it. There is plenty to cringe about in the story, quite apart from Lord's bungling, and King's habit of giving his characters jokey names is especially irksome. He doesn't ramble quite as much as in some other books, but his habit of inserting his own idiosyncratic opinions in his stories is also rather challenging to a modern reader. So it is undeniably a flawed novel. But if you are fascinated by the structure and techniques of the Golden Age mystery, as I am, it is a must-read.
Posted by Martin Edwards

Next only to "The Face on the Cutting-Room Floor" by McCabe, this is the mystery novel that I disliked reading the most. I found it boring, was not energized by the puzzle or the characters, and saw no redeeming quality like wit or style. I do not understand why it is considered a classic.