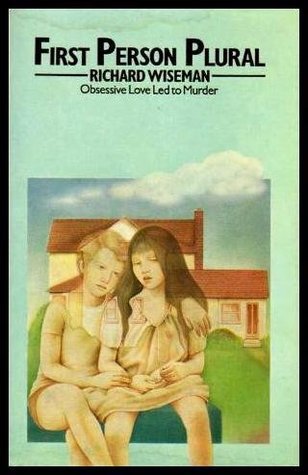 Sometimes it is rather harsh to describe the books I cover in this Friday blog post as forgotten But I don't think there can be any doubt that Richard Wiseman's First Person Plural qualifies for that description. It was published in Macmillan in hardback in 1975 and as far as I know it never made it into paperback. I don't know anything about the author (though I did know someone with the same name!) and as far as I know he wrote only one other crime novel, which was published by Hale.

I saw the book in a second hands shop and bought it on impulse, not knowing anything about it other than the tag-line: "Obsessive Love Led to Murder". I didn't have high hopes, for sure, but once I started reading, I couldn't stop. It's a short book, but I finished it very quickly indeed. It's certainly easy to read, and quite compelling.

The structure is clever. The story is told by three children, who are orphaned and left in effect to their own devices. I don't want to say too much about what happens, for fear of giving spoilers. The blurb calls it "a very unusual novel of suspense....The author displays marvellous invention and a compulsive narrative power..." This isn't an exaggeration. Wiseman may not have been an experienced crime novelist, but he could certainly write.

Interestingly, the novel anticipates a much more famous book with a similar scenario, Ian McEwan's The Cement Garden. Of course, the story develops in a different way, and of course McEwan is a better writer, but I do think it's a shame that Wiseman seems to have sunk so deeply into obscurity. On this evidence, he deserved a better fate. There are flaws in this novel, but I'm definitely glad I read it.
POSTSCRIPT - thanks to Jamie Sturgeon, I've learned that Wiseman was a pen-name of Nick Bartlett, whose obituary is here: https://www.theguardian.com/theguardian/2008/jun/20/1

Our Mother's House, by Julian Gloag, later filmed, is another possible precursor of The Cement Garden.