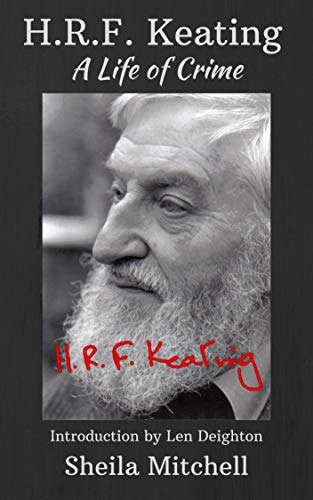 There aren't many authors who publish their first book at the age of 94. And I bet there are even fewer whose debut is such a lively read as H.R.F. Keating: a Life in Crime, the biography of a notable crime writer and critic. But then the author in question, Sheila Mitchell, is quite a special individual. She's the ideal person to write the book, since she is Harry Keating's widow. And what is more, she is a very readable writer.

Harry Keating was an author I enjoyed reading long before I got to meet him. He was a highly successful novelist, winning two Gold Daggers as well as the Diamond Dagger. He was just as good as a short story writer. And I was a particularly big fan of his non-fiction, in particular his book  Writing Crime Fiction, a pithy piece of work, and one of the very best of innumerable how-to-do-it books, along with that marvellous compendium of information about the genre, Whodunit? If Julian Symons was Britain's leading crime fiction critic in the second half of the twentieth century, Harry was unquestionably the runner-up.

Sheila's book had the misfortune (believe me, quite a few of us know this feeling!) to be published during lockdown, and thus to emerge into the daylight without a formal launch, but it's a thoroughly enjoyable and informative study, published by one of the rising small presses in the US, Level Best Books. I first read the manuscript a few years ago, on Sheila's home computer, while staying at the lovely home she shared with Harry for more than half a century and I'm thrilled that it's now seeing the light of day.

There's an intro by the great Len Deighton, and (but don't let this put you off!) an appendix which is an essay by me. I wrote it in connection with Harry's being International Guest of Honour at Malice Domestic, back in 2005 and I remember with pleasure being invited to join him and Sheila on their table at the big gala dinner. Level Best has a strong connection with Malice Domestic, and so they do seem to me to be ideal publishers for this book.

What of the book itself? It's affectionate and entertaining and gives wonderful insights into the ups and downs of the crime writing life. As you read, you experience the frustrations as well as the pleasures that Harry experienced as a full-time author over the years, and this is salutary. Because he was a figure of great distinction in the crime writing world, not only in the UK but far and wide. Yet things didn't always run smoothly and Sheila explains this in a very balanced and thought-provoking way.

There are lots of interesting tit-bits. For instance, one thing I didn't know was that Harry wrote the novelisation of Neil Simon's Murder by Death. That must have been a fascinating project - it's a book I've never seen, but I now feel I really must seek it out. (I'm a big Neil Simon fan as well as a Keating fan.)

I hope this book will draw even more attention to Harry's very varied output; it certainly should. As for Sheila, her energy and determination to see this project through is entirely admirable. I'm so pleased, both for her and for Harry, that this delightful book is now available at last.
Posted by Martin Edwards

I totally agree on the readability of Sheila's book - and it's also full of the kind of detail that makes you feel you know, and are almost part of, the whole Keating family!
Peter Buckman