The Finisher by Peter Lovesey - review 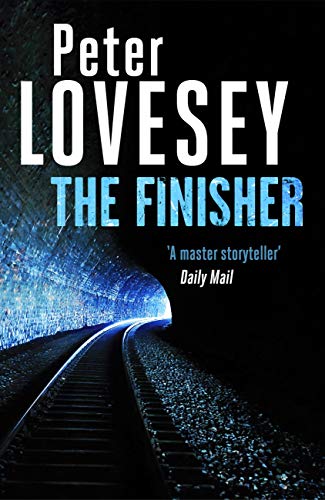 The Finisher is not merely the 19th novel in Peter Lovesey's highly successful series about Bath cop Peter Diamond. Its appearance marks the 50th anniversary of the publication of Peter's award-winning debut novel Wobble to Death. And very cleverly, Peter has returned to a key theme from that first novel and given it a fresh spin. The 'wobble' was a Victorian race, and The Finisher deals with present day half-marathon running. It's a great way to celebrate a literary career of sustained achievement.

The storyline is constructed with such cunning that I don't want to say too much about it, for fear of giving too much away. I was hooked right from the first two sentences: "The city of Bath isn't all about Roman plumbing and Georgian architecture. It offers unrivalled facilities for getting rid of unwanted corpses."

We're promptly introduced to a ruthless killer known as the Finisher (and "finishing" is a concept used astutely throughout the story) but then events move forward in quite a discursive way, as Lovesey constantly teases us with different possibilities about what might happen next. Not just who is the killer, but who might be killed. I have a particular, if inexplicable, enthusiasm for crime novels with underground scenes, and there is plenty in this book to satisfy that taste - there's even a "tunnel of death". There's much else to enjoy, including a good deal of humour, with a lovely, sly P.G. Wodehouse joke.

This is a story firmly set in the present day (or at least the immediate pre-pandemic present day!) but Peter Lovesey's storytelling skills, and certainly his gift for constructing a fair play puzzle, match those of the finest exponents of Golden Age fiction. As a bonus, there is a delightful map in the classic tradition. Even though I've followed Peter's career closely since my student days, I found the afterword, "Running into Writing", informative and enlightening. I won't pretend that I share Peter's enthusiasm for running, any more than I shared Dick Francis's devotion to horse racing. The gift of both men is an ability to write about their passions in a way that attracts even sceptics like me.

I often think of Peter in connection with two writers born in the same year, Reginald Hill and Robert Barnard. Three delightful men, three outstanding crime novelists (and equally accomplished writers of short stories and non-fiction). Three superb entertainers, in short. Now, alas, there aren't any new novels by Reg or Bob to look forward to, so there is all the more reason to appreciate the consistent excellence of Peter Lovesey's work. He is more than entitled to rest on his laurels after such a career but I find it thrilling that he continues to write so inventively and with such panache. Long may he continue to do so.

Thanks for pointing out that Reginald Hill and Robert Barnard were born in the same year as Peter Lovesey. They are all authors I enjoy reading, although I have read more books by Barnard than the other two. And I have many books by all of them that I haven't read yet.

I was delighted to see such a positive review of The Finisher which I look forward to reading. I’ve read all the other Peter Diamond stories which are cleverly plotted and laced with humour. Peter Lovesey is one of the great detective story writers of the modern area, in my opinion. As you say, Martin, long may he continue.