The British Library recently announced their programme of Crime Classics for the first half of 2021 and I've already talked about my delight regarding the first-ever publication of E.C.R. Lorac's Two-Way Murder, which I think is a real coup for the imprint. I'm also pleased about the diversity, to use a topical word, of the forthcoming titles. They really are a mixed bunch. Some will appeal to certain readers more than others, but that's fine. I do think that the eclectic nature of this series is a big part of the reason for its continuing success. 'Classic crime' is much more than gentle whodunits set in English villages of the 30s, not that there's anything wrong with them - as I've mentioned in the past, The Murder at the Vicarage was my introduction to mystery fiction. 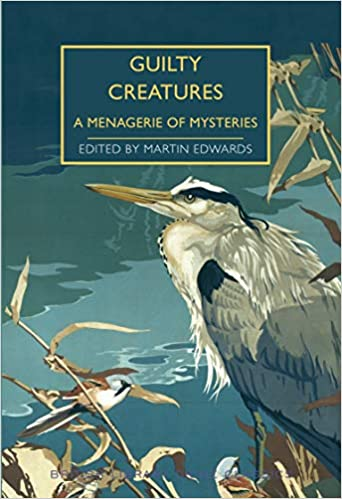 There's an anthology coming up. Guilty Creatures ('a Menagerie of Mysteries'!!) is a collection of stories connected with the animal world in one way or another. I'll talk more about the contents another time. Suffice to say that I'm pleased with the title. When I wrote the book that became Take My Breath Away, I intended to call it Guilty Creatures. But another novel with that title (not a crime story) came out ahead of mine, and my agent asked me to change the title. At last I've finally used it...

There's another John Dickson Carr, The Corpse in the Waxworks (we're using the US title) and another Mary Kelly. Don't be fooled by the cheery, summery cover of Due to a Death - it's a pretty bleak story, albeit very well-written and much praised by the top American critic, Anthony Boucher.

For light relief, I can recommend Nap Lombard's Murder's a Swine, an amusing war-time mystery. And then there is The Chianti Flask by Marie Belloc Lowndes. She remains known for The Lodger, but her other work in the genre is under-rated. Real life crime intrigued her, and as a result her fiction studies attitudes towards crime in a way that, decorous as the prose may be, seems to me to be rather ahead of its time.

I love the idea of guilty creatures. By the way I am enjoying your Hanging Wood novel at the moment.
Its one of my five on the go books. Although, it is reminding me why I miss the Lakes.

Thanks, Jane. Yes, the travel limitations are truly frustrating. I was very glad that in the summer I had the chance to revisit the locations of the next Lakes book, The Crooked Shore, on a lovely sunny day. A good memory.

Great News !!! However, since the paperbacks are priced very high in India(almost twice the price of popular paperbacks),I used to buy second hands from Amazon. Sadly the seller has gone AWOL since the Covid outbreak ...Lets see when I get my hands on the ones published in 2020 first .