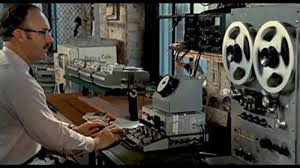 In my first year as a student, I was very keen to learn - not just my subject, but about culture and history much more generally. I'd worked for six months in a factory and I seized the opportunities that suddenly opened up before me to try to broaden my mind and understanding of the world. I didn't do everything I aimed to do - not by a long chalk - but I did see a lot of films. Among them was Francis Ford Coppola's The Conversation. During the early scenes I was puzzled, but I quickly became hooked. I came away from the college where the film was being shown stunned but enthralled. I've just watched it for the third time and I remain a very big fan of this movie. It's subtle, clever, and engrossing.

The memorable opening scene is at Union Square, San Franscisco. A few years ago, I stayed at a hotel just by the square, and those memories came flooding back as I watched Gene Hackman, as Harry Caul, mounting a surveillance operation on a young couple who keep moving around in the crowd. Harry has been hired by 'the director' to find out what this pair are saying to each other. And Harry is the best in the business.

The key plot strand concerns Harry's attempt to understand the meaning of the conversation that he is listening to. This final plot twist here is brilliantly done - I'd call it Christie-esque in its combination of simplicity and excellence. But there's much more on offer here than mere plot (good though that is). Personal privacy is a central issue, one which is even more relevant today than it was in 1974. You only have to compare the recent British film Framed to see how tricky it is to deal with such a subject successfully, but Coppola's film really does make us think in a way that Framed does not.

And then there's the portrayal of Harry himself. Hackman is at his very best, capturing the man's loneliness and insecurity in very few words (the title is, in one sense, ironic: there isn't really a lot of conversation in this film). A terrible incident in his past fuels his paranoia. And this is one of those stories where paranoia is absolutely justified. The supporting cast includes Harrison Ford in an early role, and Teri Garr as Harry's lover, while Allen Garfield has a small but memorable part as Harry's competitor - is excellent. It's one of those films that stands up to repeated viewings and close examination, because it's the work of a gifted writer-director at the very top of his game.

One of my own favorites as well--for so many of the reasons you articulate here. I haven't seen it in many (many!) years, though, and this reminds me I should rewatch!

Thanks, Art. I can promise you that it definitely repays rewatching! A masterpiece.