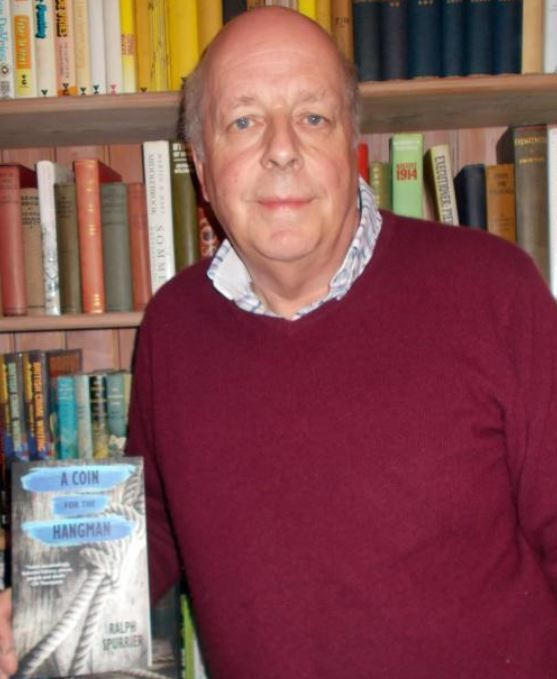 I was extremely sorry to hear the other day of the death of Ralph Spurrier, a very good bookseller and author of a crime novel, A Coin for the Hangman, which drew on his professional expertise. I've known Ralph since my earliest days in the CWA and he was for a number of years a regular attender at the annual conferences. Although based down in Sussex, he even joined northern crime writers for a memorable weekend symposium arranged by Reginald Hill at Grasmere in the early 90s.

Before setting up on his own as Post Mortem Books, Ralph worked for Gollancz, and he had a fund of stories about that period in his life. He recently contributed an article to CADS about his early days in bookselling and I hope that he managed to continue the series before things became too difficult for him. His occasional ventures into publishing were interesting - for instance, he reprinted Murder in the Dispensary, an early Ellis Peters novel, written under the name Jolyon Carr, and also published some checklists and other pamphlets.

Although I've not seen Ralph in person for a number of years, we kept in fairly regular touch by phone and email. I've bought a number of books from him in the past twelve months, including some titles by C.W. Grafton (father of Sue) with accompanying correspondence to Ralph.

Ralph broke the news to me late last year that he was downsizing his collection and stock because he was terminally ill. I was very shocked. The last email I had from him was in April. It made very poignant reading: 'I am under hospice palliative care which means a weekly visit from the nurse and prescribing of essential drugs to keep me pain free etc. I can still function well enough in the mornings but tend to run out of steam by lunchtime. I am in the process of tidying up all the business and financial ends...An end of an era then but I look back with much joy on the business I built up and all the lovely people I have met. Especially dear to me is to see such authors as yourself, Ann  Cleeves and Ian Rankin who all had a tough time getting published and making sales in their early days now becoming high flyers.' As is evident from that small extract, he was a very good-natured fellow and I shall really miss him.

Terribly sad to hear this.

What a sad loss. A renowned name, and a bookseller of kindness and class. His article for CADS was a delight, quirky, fascinating and unique. He will be missed, but remembered with warmth and smiles. Commisrations to his family and all who knew him and benefitted from his work.

Very sad to read this news, Martin. Back in the 1990s, I used to write articles about crime fiction for 'Book and Magazine Collector'. While it was relatively easy to get information about the authors' lives and to add my own views on their books, it was much harder to find out what their first editions were worth and how scarce or otherwise they were. (Although I was a book dealer myself at the time, I was very much in the 'pile them high, sell them cheap' market so I didn't often come across the rarest items myself.) I remember Ralph as being very helpful on a number of occasions when I sought his advice as to market values/collectability. There was nothing in it for him, but he was still very happy to give me his time and share his knowledge. Martyn.

Thanks very much for your comments. Yes, it really is sad news.