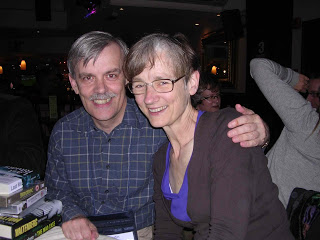 In common with many people, I was shocked and saddened earlier today to learn the news of the death of Maxine Clarke, whose blog Petrona has long been an outstanding resource for crime fans. There are already several wonderful and heartfelt tributes by fellow bloggers, such as Margot Kinberg and Rhian Davies, and I can only echo the sentiments they express so very well.

I had the pleasure of meeting Maxine at Bristol and Harrogate, and found her a delightful person.  We also corresponded often by email, and her comments on this blog were invariably well thought-out and perceptive. Over time, we discovered that we had a number of things in common. Unlike me, though, Maxine was very knowledgeable about scientific and technological matters, and her advice on I.T. and more effective use of the internet and social media was given generously (though probably with a touch of frustration at my inability to translate into practice some of her eminently sensible suggestions.)

My favourite memory of Maxine is probably of an evening when we were in the same quiz team, along with Karen Meek of Eurocrime and others, at Bristol. It was really good fun, a very convivial group. The photo of Maxine and me was taken that evening, and I'm grateful to Karen, on whose blog the shot originally appeared for permission to reproduce it here. Incidentally, the fact that our team, the Euromonkeys, triumphed that night was due in large measure to Maxine's knowledge of the genre, which was very wide. She knew more about Scandinavian crime fiction, for instance, than almost anyone I've ever met..

Maxine showed me a good many kindnesses over the past few years, which I much valued. She is a great loss, above all to her family, to whom she was clearly so devoted.
Posted by Martin Edwards

Martin - What a lovely tribute to a fantastic person. You were fortunate indeed to have been team-mates with Maxine; she was so brilliant and well-read in crime fiction. I'm glad you have that memory. And we are all fortunate that Maxine was a part of the crime fiction community. Her loss cuts very deeply...

Margot, Sarah, thanks very much. Brilliant is the word, Margot; she was a remarkable woman and as you say, astonishingly well read.

Margot, I can attest that Maxine and Martin made a fine pair of teammates. My team placed second to their, and it was hard to expect better against a lineup like that.

I love how word of her passing is slowly making her way around the blogs in such a kind and sad way. I did not know her at first hand, but remember her comments here and elsewhere. I am glad you all are taking the time to remember her for the rest of us.

Brilliant is the word I'd used to describe Maxine, but I'd add that her book reviews and blog comments not only crackled with incisive remarks but also with wit.

I'd also say that she had tremendous integrity and dignity about how she conducted her life while ill.

Again, thank you so much for these further comments. She made a great many friends, both in cyberspace and the real world.