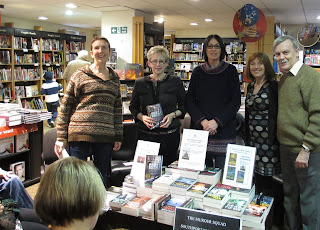 It was great fun to go back to Southport at the week-end for a Murder Squad event at Waterstones. Since the six members of the Squad are based in different parts of the North, it isn't often that we are all in the same place at the same time, and on this occasion Chris Simms couldn't make it, but it was good to see Margaret Murphy, Ann Cleeves, Kate Ellis and Cath Staincliffe again.

The Squad has been doing well. Ann has not one but two TV series on the screens, with Shetland now expected to air in January. And the fact that Margaret and Cath shared the CWA Short Story Dagger for their contributions to Best Eaten Cold and Other Stories, the second and more recent of our two anthologies meant that the book sold especially well on Saturday.

Southport, for readers of this blog who are unfamiliar with it, is a very attractive seaside resort, but unlike so many other seaside resorts it does not have a faded and melancholic air in winter, as it is very good shopping centre. Waterstones was certainly busy in the run-up to Christmas, and we were grateful to Sharon, for organising the event, and to Sharon's son Harry Ovenden for his excellent work as event photographer - he gets the credit for the picture that accompanies this post.

Southport is where I first enjoyed literary success, when a short story I'd written won the annual writers' competition. That story, "Are You Sitting Comfortably?" later appeared in Ellery Queen's Mystery Magazine, and a few weeks later I heard that my first novel, All the Lonely People, had been accepted for publication. A happy time. And we had another enjoyable afternoon in Waterstones on Saturday before repairing - needless to say - to a local bar to catch up on everyone's news.
Posted by Martin Edwards

Gutted that I couldn't come to this, Martin. Glad it went well.

It was was so good to see everyone, Martin. Every time I listen to Squaddies at events I learn something new -- lovely to hear the story of your first ever writing success in Southport!