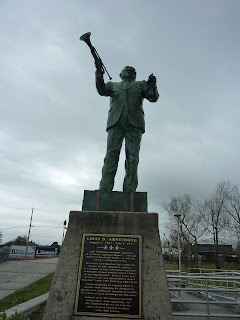 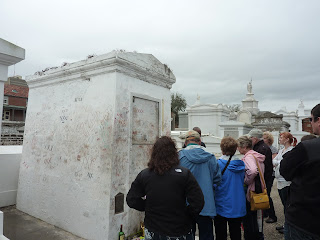 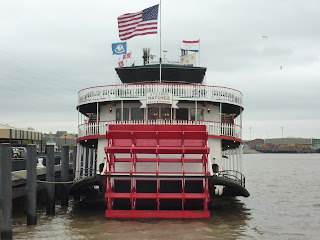 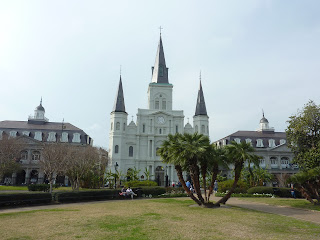 I've always wanted to visit New Orleans, motivated more by films set in the city that I've enjoyed, rather than books. The Big Easy and Angel Heart are two movies that made quite an impact on me when I first watched them, and I'm just back in the UK having finally achieved the ambition to visit a city that, despite the devastation wrought by Hurricane Katrina, is rich in character as well as atmosphere. It really did live up to expectations.

On a tour of the city, the guide said that around half a dozen films are shot in the city on average each year - a statistic I found amazing. But you can see why film-makers would be attracted to somewhere with so many visual charms. The city featured memorably in a Bond movie too, Live and Let Die, as well as in The Pelican Brief, based on a novel by John Grisham (though it wasn't a book I liked as much as The Firm, which remains my favourite Grisham.)

In a short visit, it's only possible to sample some aspects of a place with such a remarkable heritage, but I enjoyed a trip down the Mississippi in the steamer Natchez, as well as hours spent mooching around the French Quarter. It was great fun to sit in a cafe, or a restaurant at night, and listen to the music. It's a very musical city, and a quick ferry trip across the river to Algiers Point ends at a terminal close to a statue of the great Louis Armstrong.

The cemetery near to Basin  Street Station is fascinating, and the grave of the Voodoo Queen Marie Laveau is much visited. Again, full of atmosphere. Talking to one or two people who had been very badly affected by Katrina was a sobering reminder of the way natural disasters can prove life-changing. But my overall impression was enormously positive. It's taken me a long time to get round to discovering New Orleans in reality,as opposed to in fiction or film, but I hope to get back there again before I'm much older.
Posted by Martin Edwards

Martin - I'm so glad you had a chance to visit New Orleans. Such a wonderful city and so full of life and vibrancy. And the music! For me, New Orleans has so much character. Thanks for sharing those great 'photos, too.