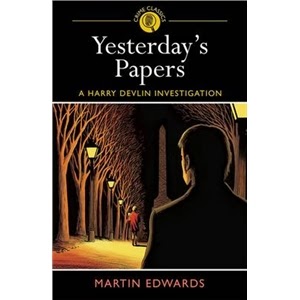 This week sees the publication of Yesterday's Papers, my fourth Harry Devlin novel, as an Arcturus Crime Classic, not quite twenty years after its first appearance. Unusually, the book has been published by three different publishers as a mass market paperback over the years (there is also an ebook version with a wonderful intro by Peter Lovesey, as well as a paperback print on demand version.) Originally the publisher was Bantam. Later, when I moved publishers to Hodder, they reprinted the earlier titles including this one. It's also, in a way, a "cold case" story that anticipates elements of my Lake District Mysteries.

I'm especially gratified because this is a book for which I've always had a soft spot. If pushed, I'd say it's probably my personal favourite among the Devlin titles. I'm not one of those authors who disowns his earlier books, or feels unduly embarrassed about them - even though I'm the first to admit that I'd write them differently (in some respects) if I were writing them today. I must say that it's rare for me to re-read my earlier work, though I do have to do so occasionally (for instance, when checking proofs of new versions or checking facts for an article.) But the early books provide, in some ways, a snapshot of ideas and issues that were interesting me or concerning me at the time I wrote them. That's true of most novels, of course, and it's one of the reasons I find it so fascinating to investigate books of the past. They cast a light on the times when they were written, even if the author didn't intend to do so.

The story of my career as a writer is illustrated (or so I might think in darker moments0 by the story of Yesterday's Papers. I felt it was the most successful book I'd written to date, with lots of twists and quite a bit of humour, as well as a glance at the era of the Mersey Sound in Liverpool during the Sixties. Bantam had tried to promote me by pricing the books very competitively. But it didn't result in mega-sales, and a complication was that I had a separate hardback publisher, Piatkus. Yesterday's Papers, however, earned numerous glowing reviews in Britain and elsewhere, and was even one of only a couple or so of crime novels featured in The Sunday Times Paperbacks of the Year. I dreamed that this would boost sales - only to be told that Bantam had already decided not to publish me any more. A shame, because they are a top publisher, and I had a really nice editor, Francesca Liversidge. But these things happen in a writer's career, and one of the most corrosive emotions is self-pity. Frustrating as the writing life can be, it's also a great life. You have to get on and make the most of it. And before long, as I say, another good publisher, Hodder, and an excellent editor, Kate Lyall Grant, came along..

Against this background, the revival of Yesterday's Papers is really rather a Christmas treat for me. I still think the plot-lines are among the best I've managed to come up with. And I'm hoping that a new group of readers will enjoy discovering Harry Devlin, and will be entertained by a story that reaches back to a time when the songs of Liverpool were being sung the world over.
Posted by Martin Edwards

Excellent news, Martin, and I'm sure many of your 'Lake District' fans will enjoy discovering Harry Devlin. I collected the series soon after I found your blog and like them very much - any chance of a new one?!