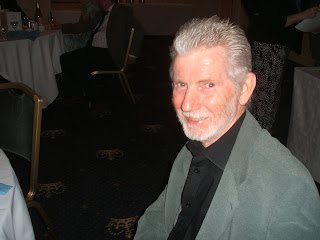 My friend and fellow crime writer Stuart Pawson has died, and in sharing this very sad news, I want to pay tribute to one of life's nice guys, a quiet, kind man who also happened to be a terrific writer. If you haven't read his novels, I can most definitely recommend them.

I got to know Stuart shortly after his first book was published by Headline. We met through the Northern Chapter of the CWA - where I've met so many lovely people over the years - and he proved a great companion, always aided and abetted by his devoted wife Doreen. When Margaret Murphy formed the Murder Squad collective of writers in 2000, Stuart and I were founder members, and we took part in a wide range of enjoyable events together. I have an especially vivid memory of Stuart reading, in his deadpan way, a very funny and quite raunchy scene to the (seemingly) staid ladies of Knutsford,and receiving a rapturous response.

He was a very witty guy, and because he was also very retiring, his humour packed even more of a punch. He, Doreen and I spent about a week together at a memorable Bouchercon in Las Vegas - was it really thirteen years ago? - and travelled around in the area - a drive through the desert to the Hoover Dam sticks in my mind as a really fun day out. This is a photo Doreen took of the pair of us on the journey, and it brings back happy memories... 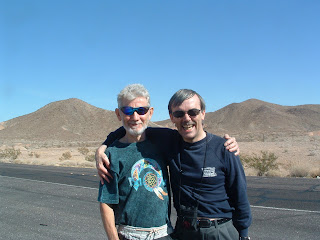 Stuart's dry wit and his love of Yorkshire make his books about Charlie Priest - there are thirteen of them - not only entertaining but also distinctive. Once in a while I talked him into writing short stories, and they too are highly enjoyable. One sad day came, though, when Stuart phoned me and broke the news that Parkinson's had been diagnosed. At that point, he didn't want it to become public knowledge,and he did keep writing for a while, as well as travelling the world with Doreen on one cruise after another. 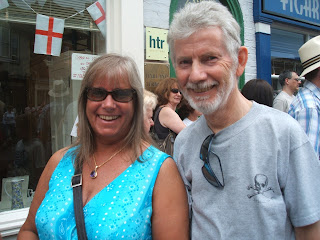 Eventually, however, the time came when writing was no longer his priority. He resigned from Murder Squad, although he continued to attend CWA lunches at Boroughbridge every now and then. I last saw him there, and he was very frail, but the trademark humour was exactly as it had always been,

I'll miss Stuart a lot. For me, as I say, there are many personal memories to cherish. For all of us, he leaves a legacy of accomplished crime writing that will be appreciated for many years to come. 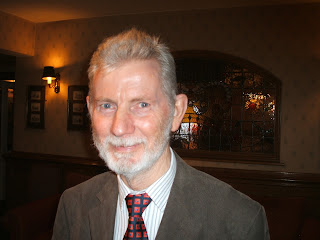 So sorry to hear this. I heard him speak once at St. Hilda's years ago (he and Marion Chesney in the same panel), and he was hilarious and charming.

What a moving tribute, Martin. I haven't yet read Stuart Pawsons books but they are now on my list.

So sorry to learn this, Martin. I love Stuart Pawson's writing. Your affection for him shines through this tribute.

Oh, I am so very sorry to hear this, Martin, and sorry for your loss. I absolutely love Stuart's books and was lucky enough to meet Stuart and Doreen a few times at various different events. He was a lovely, kind and funny man.
Donna

I know he'd been ill for a long time, but I feel really shocked at this news. Stuart was one of the first authors to support me when I was a complete newbie. And I'd already been a fan of his Charlie Priest novels for years by then. For me, they feature one of the most likeable and believable characters in British crime fiction. Stuart was a lovely man with a terrific dry sense of humour - which comes out in his books of course. RIP Stuart.

So terribly sad! My heart goes out to Doreen and I have missed Stuart on the convention circuit all these years. I think I saw him one more time after LV BCon, maybe at a Crimefest. As fellow cruisers, we'd share stories when we saw each other. I have missed them both.

So sorry to hear this, Martin. Sad news indeed.

I don't remember how I discovered the Charlie Priest books since you never see them around here. I loved his characters and their humor and I'm sorry that he is gone. I appreciate hearing what kind of a man he was. I wish that I could have known him.

Stuart Pawson has many fans in Victoria BC Canada.
He and his character Charlie Priest will be greatly missed.
Thank you for your tribute,

I am truly devastated by this sad, sad news. Stuart Pawson was one of my very favourite writers with his wonderful Inspector Charlie Priest. I reread all 13 of these books only in the last month, and that was for the third time. In spite of living in Australia I somehow related to the obvious love he had for the countryside where he spent so many enjoyable days walking and climbing.
My deepest condolences to his family.

I fondly remember him from his appearance at the International Festival of authors in Toronto. He was such a delight. May he rest in peace.

Thanks so much for all these comments. At the Northern Chapter lunch of the CWA on Sunday - in the same Yorkshire hotel where I last saw Stuart a year or so ago - we raised a glass to his memory.

I went to visit his website and found a lovely memorial to him. RIP

I was hoping that you would pass the word along to someone, however, that while I think his fans appreciate the memorial, we would love to see the website come back, while maintaining the memorial, if his wife or publisher can afford to maintain it.

Martin, it was through your blog that I began reading Stuart Pawson some years ago and became hooked. DI Charlie Priest is a likeable chap who surely shares some traits with his creator. Pity the villains of Heckley though, because this witty, risk-taking Yorkshire detective is truly tenacious in the cause of justice and given to flashes of inspiration which enable him to solve the most baffling mystery. Your very interesting post is a fitting tribute to a rattling good storyteller, and a lovely guy, who’ll be greatly missed.

Well put, Paul. Grand to hear from you as always.

Stuart's website is up and running again with some lovely photos of this most endearing man. He was without doubt one of the kindest men I have ever met. He was a true friend, and a marvellous husband to my sister Doreen. He will be greatly missed by all his family. May he rest in peace.

That's a fitting tribute to a lovely, very funny man and a great writer. Stuart was my mum's cousin so I had the pleasure of knowing him a little and corresponding with him for a while. I saw him last at my mum's funeral last year and while I was surprised to see how his illness had affected him physically, I was delighted that his humour was still just as sharp as ever. I will miss him and Charlie.

I came across Stuart's novels when I was browsing or crime thrillers in the indoor market book stall of the time in Pontefract. The stallholder asked me if i had ready any of those written by the guy from Fairburn and passed me a copy of Limestone Cowboy. I decided to give it a go and was hooked. I then bought Picasso Scam and have worked through them all now just finishing with a Very Private Murder. I am also an avid hill walker as well as reader and loved the Yorkshire and Lake District walking bits as well. Will miss Charlie Priest and Heckley CID.RIP Stuart.

I found Stuart's books one day and was hooked immediately. I am an Aussie car loving Dylan tragic, and fell in love with Stuart's stories, they are well written, interesting I found myself reading the series over and over, I never tire following Charlie Priest and his colleagues as solve the crimes they are confronted with. I really wished I could have told Stuart in person how much joy he had brought to my reading pleasure. R.I.P Stuart.
Don Jackson,
Lismore, NSW, Aust.

One of my favourite authors. So very sad to read of his death,but grateful for the many hours of reading pleasure his novels gave to me ,a former Yorkshire girl.
Rosemary MacDonald Woodville NZ

I have only just read of the sad death of Stuart Pawson, whilst looking to see if there were any of his books that I haven't got.....There aren't. What a tragic loss to the world of crime fiction. The Charlie Priest books are wonderful, I have them all but ration myself to only reading one occasionally as a treat. So very sorry to hear of Stuart's illness and passing. Huge sympathy to his family and friends.