Serpents in Eden and other British Library Crime Classics 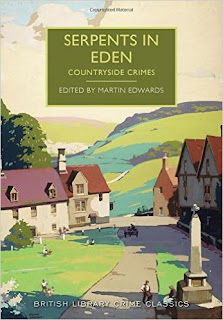 The British Library is responding to reader demand by continuing to publish a diverse range of titles in its Crime Classics series. The latest John Bude book, Death on the Riviera, which is in my opinion highly enjoyable, is selling tremendously well, while my anthology Murder at the Manor is also going great guns. The next anthology in the series, Serpents in Eden, is now out, and here I've gathered together stories about crime in the countryside. Some great writers features - Conan Doyle, E.C. Bentley, Margery Allingham and the under-valued H.C. Bailey among them. And there are also some less familiar names, including Leonora Wodehouse - yes, the daughter of the legendary P.G....

I'd also like to mention two other novelists whose work is due to appear in the series shortly. The first is Miles Burton, one of the aliases of Major John Cecil Street - crime fans know him best as the ultra-prolific John Rhode. The BL have opted to publish two of his stories about Desmond Merrion - The Secret of High Eldersham and Death in the Tunnel.

A writer who was, I have to confess,previously unknown to me before the BL identified his potential is John Rowland. He usually wrote about Inspector Shelley, who features in Murder in the Museum and Calamity in Kent. In writing my introductions to the books, I benefited greatly from information supplied by Fytton  Rowland, son of the author, and I discovered that Rowland was an interesting chap whose other writing included a tribute to Eden Philpotts and a number of true crime books -including a significant study of the Wallace case.

There's plenty more to come in the second half of the year, including another anthology, and a book that has a quite unique dimension; I'm especially excited about the latter project. At present, my lips are sealed, but all will be revealed before too long!
Posted by Martin Edwards

Labels: Calamity in Kent, Death in the Tunnel, Death on the Riviera, John Bude, John Rowland, Miles Burton, Murder in the Museum, Serpents in Eden, The Secret of High Eldersham

If you are publishing Miles Burton, then you must be in touch with Street's estate. Is there any possibility of the British Library publishing The Paddington Mystery or any other of the scarcer Priestley books?

As far as H. C. Bailey goes, I think his almost total eclipse (considering he was one of Haycraft's Big Five of the Golden Age [in Murder For Pleasure]) is both just and unjust. I think it is just because he never seemed to be able to overcome his prejudices against the upper classes; a detective novel is not a political soap box. Further, as I have said elsewhere, I think that Reggie Fortune sets the gold standard for the obnoxious hero. On the other hand, it is very unjust because Bailey was a highly-skilled writer of detective stories, and, I think, fully worthy of being one of the Big Five of the Golden Age. His almost complete disappearance from the scene (except for a handful of reprints)remains a mystery, seeing that Christie and Sayers maintain a world-wide reputation, Crofts maintains a reputation at least in the West and in Japan, and Freeman continues to hold his own.

Anon (1). Regarding the Rhode books, it's impossible to say at present if there will be more titles by him in the series. I suspect it will depend on a variety of factors, including how well the two Burton titles sell.

Anon (2). Bailey has certainly grown on me in recent times. His style is, I think, the biggest handicap to modern readers, but I'm planning to read more of his work soon.

It might interest you to know that the British Library books are now apparently published simultaneously in the US, which was definitely not the case with Capitol Crimes. I had to wait months for that one.

Thanks, Graham. There's been a catching-up process in the US, but my guess is that from now on, titles will appear (roughly) at the same time in both countries.