Robert Barnard is Back 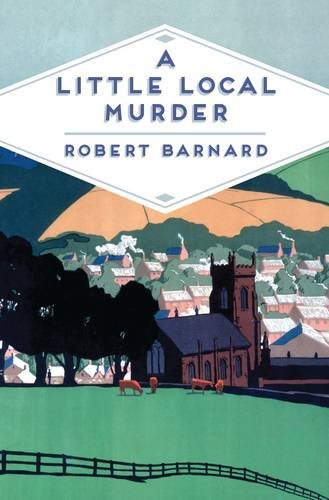 Less than three years after we lost that fine crime writer Robert Barnard, it's good to see that Bello are making a bit of a splash with his extensive backlist. In particular, they have reissued two of this books in attractive paperback editions, which have some of the nostalgic feel associated with the cover artwork of the British Library's Crime Classics series.

There's no doubt that the success of the British Library series has been enormously influential -it's the reason why you will again see plenty of crime books with seasonal covers this year, as you did last, and why so many traditional mysteries are now being reissued with lovely covers that cater for a touch of nostalgia among readers.

Bob was a witty exponent of the traditional mystery, and had strong views about it. "Second murders are always vulgar", he once said, with tongue perhaps slightly in cheek. He deplored formulaic writing, and although he did have series characters, such as Perry Trethowan and Charlie Peace, they were not as memorable as, say, Dalziel and Pascoe, but really represented a convenient way of tackling the business of solving a  murder puzzle.

A Little Local Murder, one of the two new paperbacks, is characteristically clever, not least because Bob toys with his reader's expectations. It seems to be predictable who will be murdered - but he turns the tables on us very neatly. This is a village mystery somewhat in the Christie vein (and Bob was a great admirer of Christie; I heard him give two excellent talks about her, and his book A Talent to Deceive remains an excellent study of her work) but with a character of its own.

I'm sure that Bob, mischievous as he was, would be greatly amused to see that The Case of the Missing Bronte is also being highlighted in the new edition. He once told me it was his worst book, and then relented slightly when inscribing a copy to me - describing it as "my second worst book". He was a harsh judge of his own work, but I must admit it's not one of his best. This is so despite the fact that he was a great expert on the Brontes, and once led a fascinating tour for fellow crime writers around Haworth Parsonage: a memorable afternoon indeed. So which Barnard title is my favourite? I'd probably plump for A Scandal in Belgravia.
Posted by Martin Edwards

Have liked a few Barnards, though it's the Christie book, Talent to Deceive, that I will always treasure - I consult it often. But you did recommend Scandal in Belgravia to me, and I liked it very much.

I hope the reissued books make to the U.S. marketplace. I need to check. Your posting reminds me: it is time to revisit Robert Barnard. Thanks!

I read The Case of the Missing Bronte recently and absolutely loved it - surprised he thought it his worst! I'm reading this one now and liking it less. No accounting for tastes!

Moira, yes, A Talent to Deceive is excellent.

Thanks, Tim. Quite a few of his books have worn very well, though some of the topical ones - including the entertaining Political Suicide - are now very out of date, despite their merits.

Very true, Harriet. And it may be that Bob's view informed my own a bit. But it's not one of my favourites, for sure.

I'm not surprised that he waited until he'd left the country to write his first crime novel, Death of an Old Goat, set in provincial Australian academia. None of his other novels were so unkind.