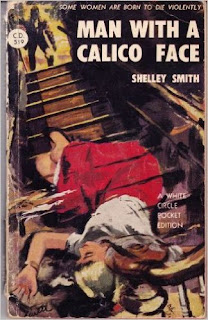 I've written here previously about my enthusiasm for the crime fiction of Shelley Smith, the pen-name of Nancy Bodington, nee Courlander. That interest was originally fired by Julian Symons, a long-time admirer of her work, who heaped praise on her in Bloody Murder, and subsequently shepherded that brilliant novel An Afternoon to Kill back into print in a series of Collins Crime Club reissues.

Man with a Calico Face is a fairly early book, first published in 1951 and it's hardly ever been mentioned on the internet. I did, however, find a link to a negative contemporary critique in Kirkus Reviews, which moans about the unpleasant nature of the characters. This is a complaint often made about the books of Francis Iles, whom Symons and I both admire, and although there is a grain of truth in the complaint, I think it's overdone in relation to both Iles and Smith. Like Symons, I think that Smith's work occasionally betrays Iles' influence, and that is especially true of the final twist in this novel.

At first, I have to admit, I was underwhelmed by the story. An attractive wife and mother is found dead at the bottom of the stairs. The body is discovered by a young man who has nursed an unrequited passion for her, and her large house is occupied by a number of people who might be described as hangers-on. There is no sign of her husband. How has she come to die? The seasoned mystery reader might have a good idea, but the seasoned mystery reader might well turn out to be wrong, because Smith was a very clever writer

The structure of this novel is extremely interesting. After the set-up section, there is a section which delves into the past, before we come back up to date again. This is the same structure that Henry Wade used in the masterly Lonely Magdalen, and although I don't think this book is as good as that one, it's certainly intriguing, and after a slow start builds to a highly dramatic and ironic climax. And who is "the man with a calico face"? We don't find out for a long time, but the explanation rather pleased me. Not Smith's best book, for sure, but definitely worth a read..
Posted by Martin Edwards

UK ebook publishers Endeavour Press reprinted this one very recently (maybe a month ago) under the very pedestrian title "The Sting of Death."

I didn't altogether love this novel - I believe it's the second by Smith I've read - but I enjoyed it. I didn't find the characters especially unlikable, and in fact I found them compelling to read about. I felt particularly sympathetic towards Linda, whose naivete was very well done, I thought.

The final twist was clever, too. I believe I rated this one 3.75 stars (out of 5) in my journal, which is very solid.

Good to hear from you, Kacper. You're the first person I've come across who is familiar with this one. Trust you are still finding some more Pamela Barringtons to read!

"a negative contemporary critique in Kirkus Reviews, which moans about the unpleasant nature of the characters."

The book cover art is enticing enough, but your posting/review is icing on the cake. (Forgive the hackneyed trope!) However, I doubt any library or used bookstore over here will have a copy. Still, I have issued myself a BOLO for it. Thanks!

Hi Martin, just wondering which of Shelley Smith's novels would you recommend? I have 'Background for Murder' and 'There is the House' on my Kindle...

Anon - I enjoyed your comment; nice point! I appreciate having likeable characters in a novel myself, but the nature of crime fiction is that quite a few of the people need to be unpleasant or potentially so.

Tim - I picked up my copy for a couple of quid in a second hand shop, though admittedly that was a while ago. It took me ages to get round to reading it, but I'm glad I did.

Jonathan - Come and Be Killed, The Lord Have Mercy, or An Afternoon to Kill

Thanks for the recommendations Martin. Would you say these three titles lean more towards thrillers, or do they operate in the Golden Age mystery vein?

The first two are sort of domestic suspense, the third is hard to categorise but excellent. None are thrillers, nor are they typical GA fare

I liked An Afternoon to Kill, but have never thought to read more by her - I think I read a Crime Club special anniversary edition. I'll have to see if I can find another.

Whilst Afternoon to Kill is my number one Smith book, Moira, all of them are well-written and a bit unusual. She was a class act.

Smith's The Lord Have Mercy (1956) is listed in The Hundred Best Crime Stories,
published by The Sunday Time in the early 1960s. A well-deserved tribute to a
brilliant writer and an exceptional book.

Greetings! I just finished this book, and I came to the Web looking for reviews. The Kirkus review came up first; and then yours.

I, too, was underwhelmed by the first part of the book, which felt pedestrian and not particularly well imagined. My interest grew as the narrator/author got nastier with her observations and judgments. (Have you read Charlotte Jay? There's a similar tone in her books, which can be petulant and snobbish -- though no one will ever rise to level of snobbery that P.D. James glorifies.)

Call me difficult, but I like writers who aren't trying to be everyone's best friend, who see the world very clearly and aren't afraid to describe it as they see it. The writing here is quite good, I think, but Kirkus' observation about the shifting viewpoints isn't off base. And I did wish I could root for somebody; but the author seemed to have nothing but disdain for her cast, right down to the children.

For another writer who was sublimely cynical about romance, marriage, and human relationships, please try Margaret Millar: A Stranger in My Grave, Rose's Last Summer, How Like an Angel, are all masterpieces.

Thanks for giving me the opportunity to free-associate on your blog at midnight on a Thursday.