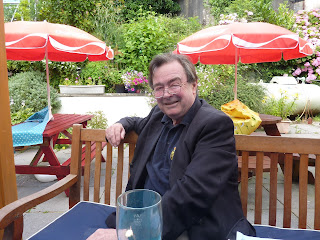 I was truly sorry to learn that Tim Heald died last Sunday, at the age of 72. Tim was a man of many parts, and novel writing was only one of the strings to his bow. He worked as a journalist, wrote biographies, cricket books, and books about royalty, and was a popular public speaker on a wide range of topics. He was also an entertaining crime writer, best known for the Simon Bognor books, which were televised, and he chaired the Crime Writers' Association. He was immensely convivial.

I'd been in touch with Tim by email for several years before I first met him in person, whilst he was on tour in the north, speaking at various cricket society functions. I took him for lunch at Liverpool's Athenaeum Club, where he regaled me with tales of his experience of the TV world (enough to make you want never to have your books televised) before presenting me with inscribed copies of several of his books, which I treasure. I also had the pleasure of including a couple of short stories he'd written in anthologies I edited. Years earlier, he'd edited a first rate anthology, A Classic English Crime.

Most memorable of all was a weekend I spent with him in July 2012. This was at the Kidwelly e-Book Festival, an extraordinary event where attendance figures did not exactly match the organiser's laudable ambitions. Most of the time, authors outnumbered attendees, but Tim's company was one of the things that made the whole weekend remarkably pleasurable. The photo shows him in the beer garden of the Red Lion in Kidwelly, where we recovered from the experience of the festival before enjoying a good many laughs over dinner..

The last time I saw Tim was in March last year, at the CWA conference in Lincoln. By that time, sadly, he'd been stricken with illness, and was not very well at all. Some years earlier, Tim had seconded the nomination that I be elected to the Detection Club, and he expressed his delight that I was to become the Club's President later in the year.. I asked if he thought he might be able to attend and he shook his head. But with a twinkle in his eye, he said, "I'll be there in spirit." And so he was.

Read all of his mysteries--with great enjoyment and appreciate his contributions to our reading pleasure. Each loss is a sadness to all of us.

Sad news. I was a big fan of the Bognor books.

Very sad to hear this. I was at school with him - briefly because I was older and we overlapped only for a year or so. But that was long enough to recognize that here was someone irrepressible and determined to enjoy life to the full. I wasn't surprised that when some years later when his books began to appear they were full of his characteristic humour and ingenuity.
The same qualities were there in his blog, which I discovered only some three years ago. What made it unique was the sheer variety of the life it revealed. He seemed constantly on the move, rushing between cricket grounds, literary festivals, memorial services, family gatherings, good and bad restaurants, theatres, concerts, foreign parts and enjoyable encounters with royalty (as opposed to royalties, with which he had the true author's obsession).
And it all continued despite the inexorable progress of his illness; he refused to let it stop his making the most of every day; his honesty about the difficulties and confusions and inevitable humiliations of his condition was admirable and moving. Increasingly, musings on the infirmities and deaths of friends, family members, heroes (and villains) appeared, as they are bound to do in the annals of any active, sociable person who reaches even the fringes of old age; this lent an elegiac tone to the later entries. The last of these appeared in May 2015. Sadly, only the last ten entries remain on Tim's blog. If the many previous are still stored in his computer, I hope his family feel able to rescue them to go with his other papers. Together they form an irreplaceable record of the ups and downs of someone who set out to survive as a professional writer, and did so with the same energy and seemingly effortless style that he brought to exploring the pleasures of life itself.

Mike, thanks for this great comment, with so many well-made points. I share your enthusiasm for his blog.

I can only agree with what everyone else has said here. The Heald blog is a fascinating piece of work in its own right, and it might be worth trying to get it published in a more permanent book form. The Bognor TV show first drew me to his books, and looking back I'm surprised at just how much of his work I've read. I know that he referred to himself as a 'footnote' in literary circles, but his work deserves to be much better known and I hope that it is not allowed to slide into obscurity. I recall an absolutely fascinating non-fiction book that he wrote called NETWORKING which was about the 'Old-Boy Network' and which is definitely worth hunting out.

I'm sad to hear this. By chance I just read A Classic English Crime, which I stumbled on in the local library.

Very sad to hear this (belatedly) as I knew Tim in the 80s when he was involved with PEN and enjoyed his genial, civilised company on several occasions.