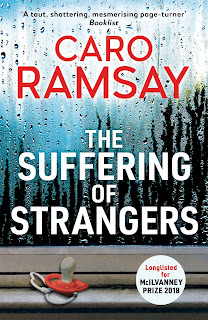 Caro Ramsay is a terrific writer with a new book, The Suffering of Strangers, just out from Black Thorn, and I'm delighted to feature a guest post from her on a subject relevant to the novel and one which fascinates me a good deal. Having just watched the riveting 63 Up directed by Michael Apted, the premise that our natures are fixed very, very early in life, perhaps right from the start, seems fairly compelling. Over to Caro:

"I once heard the witty and engaging crime writer Robert Thorogood (he of Death in Paradise fame) refer to the ‘deep rabbit hole of the internet’. Seemingly, many writers spend a lot of time in there messing around, surfing, looking at pictures of kittens playing with raccoons while ignoring emails from their agents asking them to kindly get the book finished.

For the book The Suffering Of Strangers, I was doing some research about genetics, chromosomes and DNA and came across the name Professor Robert Plomin.
And promptly forgot all about him.

Then about eighteen months later, I received an invite to chair an event at Aye Write (Glasgow’s literary festival) and at this event somebody called Mark Billingham was going to have his DNA examined live on stage by…. Professor Robert Plomin.

Prof Plomin, ‘Bob’ to his friends, is one of the most cited scientists of the 21stth Century, and one of those experts with the rare ability to really engage the audience. We sat spellbound as he spoke in his delicate Vincent Price tones, telling us that Mark was 4% Neanderthal and that he had the ability to smell both coriander and asparagus. And that he carried the genetic marker for obesity. Mark himself was aware of that, due to his love of coriander flavoured Indian cuisine. Nobody mentioned the lager...

The professor, who was on the front of the New Scientist magazine last week, has researched twins, and hundreds of thousands of adopted children, especially where children of different families are adopted by the same parents, a situation which could be considered as the best test of ‘nature verses nurture’.

And nature wins every time. You are your DNA.  And that’s about it!
Nurture is important, very important, but nowhere near as influential as most people think.

Parenting matters. It’s important for children to have good, steady and loving backgrounds. But parenting  does not matter as much as the average parent would like to think. Adverse childhood events obviously affect the psychology of the child, but the degree of influence and damage will be genetic. Is it having parents who have chaotic, challenging lifestyles that make a child misbehave and become disruptive? Or is it the fact that the child has the same ‘chaotic DNA’ as their parents.

I was fascinated by this and told him that my adopted cousin ended up sitting next to his own birth brother at school. He played football with another two of his brothers. So I said, well that proves it!

‘Well, maybe,’ he said, ‘Did they live near each other?’
‘Yes.’
‘In the catchment area of that school?’
‘Err yes.’ I was guessing where this was going.
‘Was he very close in age to his birth brothers?’
‘Yes, that’s why he was put up for adoption.’
‘So they would be in the same year at school. And I bet most Scottish boys tend to play football. So that’s not a genetic thing, that’s just plan logic.’
Mmmmm. Thinking now, going over it. Nobody in his adopted family has ever joined the armed forces but my adopted cousin was always very keen. When he reunited with his birth brothers, they were all in the army, one having served in the same unit as my cousin.
So, I think the genes were at work there, in the background.

The genetics playing out in a family can be easy to see, no two siblings are alike. There’s one a bit more like Mum, the other a bit more like Dad. Every family has a ‘mad uncle Tommy,’ the one who is first on the dance floor at weddings. And there will be ‘a Tommy’ in every generation or so.

But what of an evil gene? Does that exist?
When a notorious serial killer appears on TV, what exactly are we looking at?  Are they inevitable, a mixture of two ‘bad’ genetic strains coming together?  Yes, they will tend to have suffered adverse childhood events, usually at the hands of their parents. And there is evidence of the violent ‘gene’ ready to be passed on to the next generation.

Can that dangerous genetic sequence ever be recognised?

If it does, could that ever be a defence in court?

The professor did allude to a ‘triple whammy’, my inverted commas. A piece of genetic coding that brings psychopathy, narcissism and very high intelligence together. These, he said gravely are very dangerous people. Genetics are not a disease that can be cured, genetics are the building blocks of ‘self’.
He also added that they are incredibly rare.
And we should be thankful for that."

Labels: 63 Up, Caro Ramsay, Michael Apted, The Suffering of Strangers