Bodies from the Library 2, edited by Tony Medawar 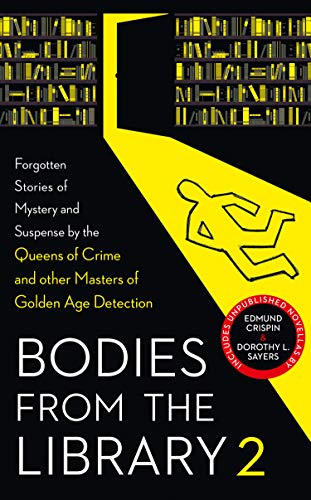 The title and contents of this HarperCollins anthology are inspired by the Bodies from the Library conference, which has for the past five summers been held at the British Library and brought together fans of Golden Age detective fiction from all over the world. Tony Medawar, who has been researching the genre for a good thirty years, has conceived the idea of a series of books gathering stories (and radio plays) which he has, in many cases, rescued from obscurity.

Tony is a particular expert on Agatha Christie and the first Bodies book included an excellent rare story by the Queen of Crime. She features again in this book, which I think represents an advance on its predecessor in terms of the overall range and quality of content. There are two particular stand-out contributions, one a long-lost Lord Peter Wimsey story and the other a novella by Edmund Crispin. Rare finds indeed.

The Dorothy L. Sayers story is called, simply and splendidly, "The Locked Room". There is, arguably, a question mark over one aspect of the plot, which may explain why the story (which evidently dates from the late 20s) wasn't included in the Wimsey collections. It's a mystery to me why Crispin's "The Hours of Darkness" disappeared from sight. It's a very pleasing case for Gervase Fen, which is not even mentioned in David Whittle's magisterial biography of Crispin.

The other contributions are a very diverse assortment. So there's a story by S.S. Van Dine,and three others by American authors: Clayton Rawson, Jonathan Latimer (not an author normally associated with the Golden Age, a term which has to be interpreted broadly in the context of this book), and Q. Patrick, whose work in various incarnations I've always enjoyed. The Patrick story is also a novella.

There are several other notable names in the book, such as Margery Allingham and E.C.R. Lorac, but I particularly liked "No Face" by Christianna Brand and the characteristically amusing "Before and After" by Peter Antony. There's even a previously unpublished play by John Rhode, "Sixpennyworth", which Tony speculates may have been written for a local am dram group.
Posted by Martin Edwards

This really does sound like an essential purchase, if only for the Crispin!