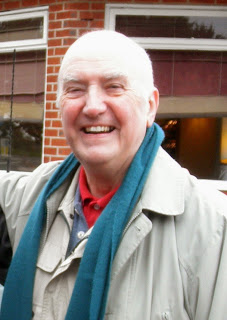 I've talked on this blog, and also at many library events over the years, about my love of the late Bob Adey's wonderful reference book Locked Room Murders. (The photo of Bob above was taken by Jamie Sturgeon a few years back.) I acquired the first edition from a London bookdealer many moons ago, and then the second expanded edition when it came out. After I got to know Bob, he kindly inscribed them for me. These are not easy books to find nowadays and so Brian Skupin and John Pugmire did fans a great service when they produced a new and affordable revised version of the second edition via John's Locked Room International imprint.

And now, they have gone the extra mile and done something that many of us had hoped Bob might live to do, producing an update of the second edition that is wide-ranging and highly informative. Brian is the author and Locked Room International again the publisher. They call it a "Supplement" but perhaps that description doesn't fully convey the scale of the endeavour. This is a very substantial book in its own right, running to 326 pages. On Amazon UK, it's for sale at about £15, and if you're a locked room fan, that makes it an unmissable bargain.

Brian and John are eminently qualified to undertake this project. They are experts in the field, yes, but even more importantly they are enthusiasts, people whose love of the genre informs their judgements. Their anthology The Realm of the Impossible is fascinating and I can't believe that I've not reviewed it at length on this blog as yet - one of these days, I'm sure I will get round to it.

In the meantime, let me say how much I've enjoyed dipping into the Supplement. It ranges very widely, paying due attention to the work of Paul Halter and the Japanese writers who have worked such ingenious variations on the locked room form as well as to TV shows such as Jonathan Creek. Various contemporary British writers feature in at least one entry - examples include Simon Brett, Chris Fowler, Jim Kelly, Ann Cleeves, and Kate Ellis. I am sure that Bob would be delighted to see this book in print. Brian and John have carried on the baton in admirable manner.

Four of my own stories are included - they are all short stories, since I've never contemplated taking on a full-length locked room novel. At least not yet. Another story, "The Locked Cabin", is due to be included in a forthcoming anthology of locked room mysteries, edited by Maxim Jakubowski although I should say that this isn't itself a locked room mystery in the accepted sense, but rather a story about the idea of creating a locked room mystery - on board the first Queen Mary.