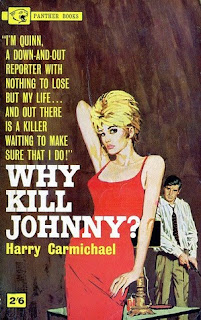 Back in the late 60s, or maybe the early 70s, I watched a TV murder game show, possibly called Who-dun-it?, which I enjoyed and which had a puzzle based on a story by Harry Carmichael. I've never been able to trace any information about this particular show and it doesn't feature in any bibliographies etc relating to Carmichael. So if anyone knows anything about it, I'd be glad to hear from them - at present there are times when I think I must have dreamt it! However, that show did kindle my interest in Carmichael, though I haven't read many of his books until recently, when Catherine Aird generously passed to me some of the Carmichaels in her collection.

One thing I also discovered quite recently was that Carmichael, whose real name was Leo Ognall, was the father of Harry Ognall. Now when I was a trainee solicitor in Leeds, Harry Ognall was a prominent criminal barrister. He subsequently became famous for his brilliant cross-examination of a defence expert witness in the Yorkshire Ripper case and when he became a judge he made an especially notable judgement in the Rachel Nickell/Colin Stagg case, which was controversial at the time - but subsequently vindicated. Incidentally, a little while before his recent death, Harry published a memoir called - guess what? - A Life of Crime!

Anyway, back to his father. Harry Carmichael is one of many authors whom I'd like to have mentioned in The Life of Crime, but there simply wasn't enough space. Under this name, and as Hartley Howard, he was a mainstay of Collins Crime Club from the early 50s to the late 70s and extremely prolific. In some ways he was a post-war descendent of the Golden Age writers, because he was adept at tricky plotting (and I'd also argue that Martin Russell, to a degree, took up the baton from Carmichael in the 70s). He also paid attention to characterisation, although perhaps not with consistent enough success to make a major impression on the critics. Barzun and Taylor were fans, though, and so is the Collins Crime Club expert John Curran, and they are all exacting judges.

Why Kill Johnny? (1954) is a good example of his craft. There is one element of the story - its starting point - that is so strongly reminiscent of Christie's After the Funeral, published the previous year - that I would guess Carmichael borrowed and adapted it for his own purposes. So I figured out one aspect of what was going on, although that didn't spoil my enjoyment, because the two mysteries are - overall -  quite different. The writing style owes something to the influence of the American hardboiled writers (as the cover of the US paperback edition above suggests) but it's not badly done. This is a pacy book, with a steadily rising body count and some pleasing plot developments.

I’ve had mixed results with the few Carmichael I’ve read, the ideas being better than the execution, I’d like to try one of the few books he wrote as Hartley Howard without Glenn Bowman, they do look more my kind of book

I recall a tv programme called "Who-Dun-it" from the 60s. I can't remember if it was a quiz or not. One episode was called "Murder Goes to School", which is passably similar to Carmichael's "School for Murder".

Thanks for these comments. Bongo, thanks for the link - I recall that series, but I'm not sure the one I remember was the same - unless it was the pilot show, which is possible. Michael, thanks for mention of Murder Goes to School, which sounds promising and worthy of further investigation