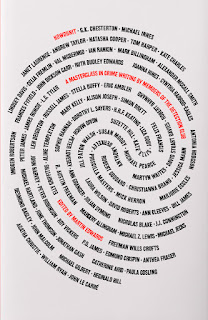 2022 has been a very busy year for me in terms of publications. The appearance of The Life of Crime was always going to be a major event in my writing life, and I'm also looking forward eagerly to the publication of Blackstone Fell, my third 'Golden Age gothic' mystery, in September. Not to mention a total of three anthologies and the paperback edition of The Crooked Shore (as well as the publication of that novel's American incarnation, The Girl They All Forgot); let alone individual titles in the Crime Classics series.
But this week I'm celebrating something else - the paperback edition of Howdunit, the book I edited on behalf of the Detection Club, which the publishers HarperCollins describe as 'a masterclass in the art and graft of crime writing'. The idea was to celebrate the 90th birthday of the Club in 2020, and although the pandemic got in the way, the book earned no fewer than five award nominations, and won the H.R.F. Keating Prize, much to my delight.
Howdunit is a book I'm proud of for several reasons. It was wonderful to receive so much generous contribution from major writers. Not one of the 90 people (or estates, in the case of deceased contributors) received a penny in payment for their contributions; nor did I. Instead, all proceeds went to the Detection Club, in line with the Club's traditions.
I also think that the book provides a great deal of invaluable information and advice for anyone who wants to write crime fiction, or simply to understand it better. Working on the book also inspired me to create the online crime writing course Crafting Crime, in conjunction with the editorial consultancy Fiction Feedback. So I'm delighted to see the book in chunky paperback form and I hope this will make the wit and wisdom of the admirable contributors available to even more fans of the genre and aspiring mystery writers.
Posted by Martin Edwards

I don't want to appear greedy but I very much hope the next Lake District novel is high on your 'To Do' list, Martin?

Martin, I've seen some excellent reviews for this, so I am going to buy a copy. But a few reviewers are saying it is more a book to dip into and jump around in, rather than to read methodically from front cover to last. Is that a fair comment? If so, I will probably make a rare (for me) purchase of the paperback rather than the Kindle edition. Thanks, Martyn

Hello again, Fiona, and thanks!There's a new Rachel Savernake out in September, and I'm currently working on the fourth book in the series. After that, maybe back to the Lakes, but it's too early to be sure.

Thanks, Martyn. I think opinions vary about this. I tried to design it - and link the pieces together -in a way that would suit people who wanted to read from front to back without digressing. However, it was always in my mind that a significant number of readers would want to hop about, focusing on subjects of particular interest. Although The Life of Crime is very different, similar issues arise there. Ultimately I think it's a matter of personal choice for the reader - both approaches are possible (and with The Life of Crime there is the added question of whether to read the chapter endnotes as you go along, or selectively, or later).