Forgotten Book - Too Many Bottles 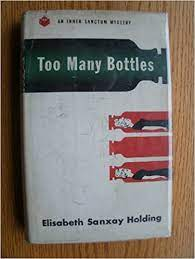 I share with Raymond Chandler and Ed Gorman, among others, an admiration for the work of Elisabeth Sanxay Holding, a crime novelist who has long been under-rated. Domestic suspense was her forte and it's at the heart of Too Many Bottles, published in 1951, towards the end of her career. This is a swift read, a short book that ranks as a minor work compared to her best novels, but not without interest (yes, I know that's damning with faint praise, but I think it's a fair summary).
We see things from the point of view of a youngish man called Brophy. He writes pulp fiction and for the past year he's been living with his new wife Lulu and her sister Norma. Lulu is good-looking and possesses a superficial charm, but she's also nervy and needy and Brophy isn't in love with her. The Brophys hold a party which goes badly and after it's over, Lulu is found dead. At first it seems as if she may have consumed a poison by mistake, but it soon becomes clear she was murdered.
Holding piles on a number of complications, and in due course there is another death. However,  I formed an opinion about what was going on during the early chapters and I was disappointed to find that I was right. The mystery isn't as complex as it might have been, and Brophy's denseness becomes rather irritating.
Yet there are some nice touches, especially during a conversation about the merits, or otherwise, of creative writing classes and in Brophy's ruminations about his own crime writing. And I did enjoy the ironic passage where Brophy thinks: 'I couldn't write a psychological novel. I wouldn't know how to motivate my people. I'm too healthy. Or maybe too dumb.'
Posted by Martin Edwards

Read this one years ago, also with an eye toward and FFB review, and was also underwhelmed while appreciating the skill with which this Not Bad book was produced. Need to read more deeply into her better work.